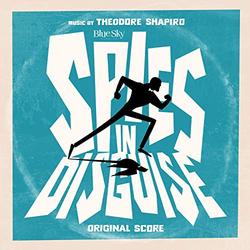 To create the score for Spies in Disguise, the filmmakers turned to composer Shapiro, whose credits also include Spy, Central Intelligence and Tropic Thunder. Bruno and Quane's first challenge to Shapiro was to compose a hero theme that would immediately evoke Lance Sterling, Spies in Disguise, in the same way you immediately know you're seeing a James Bond film or a Mission Impossible film.

Bruno said, "Teddy has this amazing ability to sort of thread that line of drama and comedy. He's able to find comedy without undercutting the seriousness of the scene. One of my favorite things that he's done is the theme for Walter's mother, who we only show at the beginning of the film, but somehow you can feel her presence throughout the film."

Commenting on his score, Shapiro said, Spies In Disguise is a very funny movie. Its score is not funny at all. The music of this film plays to its danger, its high stakes, and above all, to the opposing world views represented by its principal characters, Lance and Walter. Lance, the world's coolest spy, has come to believe that the world is a dangerous place and requires people like him, ready to fight in the cause of good. His theme is a sly, descending four-note motif. Walter, a brilliant gadget designer, lives in the belief instilled by his late mother that he might just save the world by embracing his deep belief in peoples' goodness. His theme recalls the sweetness of his relationship with his mother. Then Walter accidentally turns Lance into a pigeon, and things get weird. And while this turn in the story does bring bird sounds into the fabric of the score, the music has an epic spy adventure scope that helps tell the story of these characters' journey and emerging friendship.