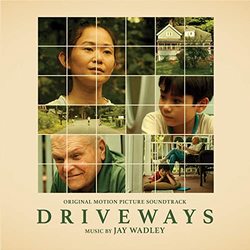 Of the soundtrack, composer Jay Wadley says, "In my score for Andrew Ahn's Driveways, I took an understated, paired down approach with textured analog production on a felted grand piano and chamber string ensemble. The film is a delicate and subtle piece, so Andrew and I felt the score needed to take extra care not to step on or get in the way of story and character. As I began the creative process, my way into Cody and Del's sound was through an attempt to capture the mood of childhood experiences like tooling around in the yard and on the porch during long, lazy, hot summer afternoons. I find a certain dreaminess, comfort, and melancholy to those days that informed the music's overall tone and character. To echo the simple yet profound nature of Del and Cody's friendship, I used equally simple recurring melodic and harmonic material that often plays as intimate duets between strings and piano. These melodies thoughtfully blossom and mature throughout the film, deepening their associations, and help us connect to relationships that have shaped us and remind us of the beauty and tragedy of their impermanence."

Driveways director Andrew Ahn adds, "Jay's score for Driveways is so human, full of character and soul. I loved working with Jay because, like an actor, he took the film on emotionally, letting the story and characters become a part of him. There's a beautiful nostalgic quality to the score that feels so personal and intimate. For this reason, the score never hits a false note; it feels truthful and genuine in such an emotional way."