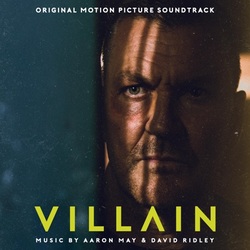 Wave Theory Records has digitally released the Original Motion Picture Soundtrack to the acclaimed action-thriller Villain, an Ascendant Films production directed by Philip Barantini. The album features an original score by composers Aaron May & David Ridley, which has been described as "brooding and unsettling" by The Guardian. Villain was released in the U.K. earlier this year, and is available on digital and On Demand in the U.S. today.

The composer-duo were introduced to Philip Barantini through a writer and worked with him on a beautiful short film called Seconds Out. Fortunately for May & Ridley, Villain's lead actor Craig Fairbrass saw the short film and insisted that not only Philip was brought as director on Villain, but that the entire creative team also remained intact. This tremendous foresight was a break for the composers and everyone involved, and led to the continuation of a team with a real sense of a shared vision.

Villain centers around the meaty East-London character of Eddie Franks (Fairbrass), exploring the emotional impact that his prison sentence has had on his family, his pub and the local community. Eddie's story begins to unravel as it emerges his brother has fallen in with the wrong crowd and he is reluctantly drawn back into his former criminal ways.

Aaron May and David Ridley on bringing their score to life: "Our task was to create a dark, gritty sound-world that would encapsulate the strong, but damaged character of Eddie Franks. While we were after an emotionally broad, contemporary sound to reflect his gravitas, we also needed to ensure that the music felt physical and organic in order to capture the urban setting of the film. The score subsequently centers around a palate that focuses primarily on the rawness of solo bass clarinet, with cello ensemble passages and textural electronics. We also had the rare opportunity to write a song for the final scene, and it was a pleasure to work with London-born soul singer Kevin Leo on the film's poignant and somewhat unexpected closing moments."