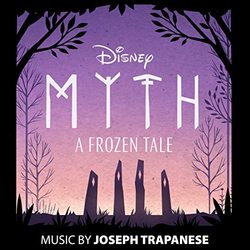 Walt Disney Records releases the digital score EP to Walt Disney Animation Studios' Myth: A Frozen Tale, the first VR short from Disney Animation to be inspired by one of its feature films. Narrated by Evan Rachel Wood, the immersive film, directed by Jeff Gipson, debuted with audiences at the world premiere of Frozen 2 in Hollywood last November. The score was composed, produced and mixed by composer Joseph Trapanese.

Gipson said, "The music in Myth: A Frozen Tale is much more than just a score playing among the action, but rather a character and a storytelling tool that expresses the harmony and balance that reflects the film's theme. I'm so excited that audiences will be able to enjoy the beautiful pieces that Joe Trapanese created for our film."

Trapanese said, "Composing the music of Myth: A Frozen Tale has been one of my most rewarding and thrilling collaborations. Jeff Gipson, Nick Russell, Tom MacDougall, and the entire team at Disney Animation saw the depth of emotion and excitement music could bring to the VR experience, and by inviting me to be a part of the early design and exploration process, the score truly became an integral part of the storytelling. I'm thrilled we can share it with you today."