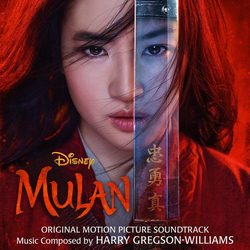 A welcome challenge for the composer was writing music to underscore a film that was grounded in Chinese legend and history. Gregson-Williams said, "The idea for the music was that it would be a fully orchestral score that had an additional layer of featured Chinese instruments woven into its DNA. Ancestry and heritage are both really important to the story, so I immersed myself in that world and sought out specific musicians who could contribute using their knowledge of Chinese music." He adds, "At the heart of the score is a full-bodied symphony orchestra and a big choir. But on the periphery, we have a lot of Chinese colors."

Caro says, "The score by Harry Gregson-Williams is every bit as epic and emotional and thrilling as the movie itself. However, it was really important to me to honor the animation by bringing in the most revered song-'Reflection.'" Written by Matthew Wilder and David Zippel, the brand-new recording of "Reflection (2020)" is performed by Christina Aguilera and produced by Harry Gregson-Williams.

"Loyal Brave True" is a new original song written especially for the film by Jamie Hartman, Harry Gregson-Williams, Rosi Golan and Billy Crabtree, and produced by Jamie Hartman. Aguilera recorded the song in both English and Spanish. Music videos for both tracks featuring Aguilera were directed by Caro.

Music from both songs is featured in Gregson Williams' underscore with Aguilera's full-length versions appearing in the film's custom main-on-end title design.

Yifei Liu, who is also a singer, recorded "Reflection" in Mandarin as well. The Mandarin version of the song was produced by Matthew Wilder, who originally co-wrote and produced the song for the animated film.