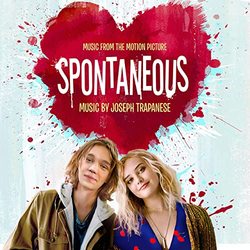 In anticipation of the debut of the satirical comedy Spontaneous, Paramount Music will release the film's soundtrack on digital platforms on Friday, September 25, 2020.

The music is by composer Joseph Trapanese whose credits include Tron: Legacy, The Greatest Showman, Straight Outta Compton, Oblivion, and many more. The soundtrack also includes a brand-new rendition of "Bye Bye Love," which is featured prominently in the film.

"Spontaneous, is as tonally intricate a movie as they come, and Joe's expertise at crafting unique and exciting scores adds so much to our movie, deftly weaving romance, comedy and exploding teens into a cohesive whole. I take all the credit for hiring him, but give Joe all the credit for making the movie work," said director Brian Duffield.

"I am thrilled to have worked with Brian Duffield on Spontaneous. We needed a score equal parts romantic, uplifting, terrifying, irreverent, delicate, and endearing. A huge challenge for any filmmaker and composer, but Brian made it an incredibly fun and rewarding process," said Trapanese.