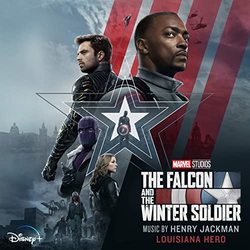 Commenting on the track, Jackman said, "Composing 'Louisiana Hero' was an exciting challenge. The idea was to take the brief heroic melody used for Falcon in the score for Captain America: The Winter Soldier and develop that motif into a fully realized super hero theme. At the same time I wanted to ground the piece by using elements of Southern blues to reflect the fact that Sam/Falcon comes from Louisiana."