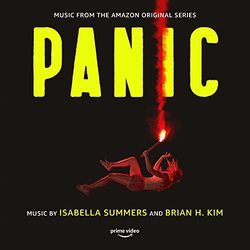 Milan Records today releases Panic (Music from the Amazon Original Series by composers Isabella Summers and Brian H. Kim. Available everywhere now, the album features score music written by the duo for the latest Amazon Original series based on the best-selling young adult novel by Lauren Olivier. Best known as "the Machine" of Florence and the Machine and an Emmy-nominated composer in her own right, Isabella Summers brings her extensive writing, producing and recording experience to the project, joining forces with classical pianist turned composer Brian H. Kim to create the show's soundscape. The resulting 15-track collection is an intensely visceral and emotionally evocative soundtrack that encapsulates the show's narrative of desperate teenagers competing for a chance to escape their small town roots. Also included within the soundtrack is a new original song performed by breakout pop singer-songwriter Tate McRae entitled "Darkest Hour." Panic premieres all 10 episodes exclusively on Amazon Prime Video today, Friday, May 28 in more than 240 countries and territories worldwide.

Of the score, co-composers Isabella Summers and Brian H. Kim say, "The score for Panic needed to be visceral and modern. The story is told through the perspective of 21st century teenagers, but the stakes are life and death, with challenges that border on tribal. We used aggressive synths—tons of Virus, distortion and effects—combined with huge war drums and attacking strings. Many synth arpeggiations bordered on abstract, but everything was always grounded in the emotion of the characters. We were able to branch those sounds into more subtle cues about family strife, tension between friends, and romance, as the show explored more personal themes. We are thrilled with how the music turned out. We think it is like nothing else out there. It is a gut punch."