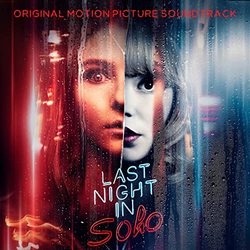 Back Lot Music has released the first single from Writer/Director/Producer Edgar Wright's Last Night in Soho in Anya Taylor-Joy's haunting cover of "Downtown (Downtempo)". The song marks Taylor-Joy's first major single with accompanying music video, which released exclusively on her Instagram channel before going wide on Focus Features' YouTube channel. An 'Uptempo' version of the track is featured as the B-side to a 7inch offering from Mondo/Death Waltz Records. Taylor-Joy performs the song in the feature film, but producer/composer Steven Price produced the two extended versions especially for the soundtrack. Both versions feature orchestra recorded at Abbey Road Studios in London.

Additionally, Back Lot/Mondo will release the various artists compilation soundtrack featuring songs exclusively curated by Wright from his 60's inspired film this Friday, October 22nd. Alongside the needledrops are three songs performed by Taylor-Joy and a score suite from composer Price. Finally, Back Lot/Mondo will release Price's full score to the film along with three additional Taylor-Joy recordings (which includes the "Downtown (Downtempo)" single) on Friday, October 29th day-and-date with the US/UK film release.

In acclaimed director Wright's psychological thriller, Eloise – an aspiring fashion designer – is mysteriously able to enter the 1960s where she encounters a dazzling wannabe singer, Sandie. But the glamour is not all it appears to be and the dreams of the past start to crack and splinter into something far darker.

Wright is well known for expertly curated soundtracks and deep musical cuts, and Last Night in Soho – itself named after the Dave Dee, Dozy, Beaky, Mick & Tich song – is no exception. The decade long development of the story was done hand in hand with finding songs that set the tone for the film he had in mind. Then, he and co-screenwriter Krysty Wilson-Cairns listened to the music he'd assembled as they wrote the script; Wright even put together a playlist for his cast members to listen to as they read the results. But he also wanted a score to soundtrack the two eras of Last Night in Soho and tie together the stories of these two very different young women. To achieve this, Wright turned once again to his now-regular composer, Academy Award winner Steven Price, who scored both Baby Driver and The World's End.

While Price's influences for the score included contemporary film music by the likes of Ennio Morricone and John Barry, the music also explores musique concréte techniques of the time, looping fragments of dialogue and on-screen sound to add a unique and often subliminally sinister edge to the score. The sounds of '60s Soho blend into the present-day London scenes as Eloise is sucked further into the past. "One of the central ideas is that Sandie's voice becomes part of the fabric of the film, so you hear her siren song from the '60s bleeding through into the present day, and Anya's performances became an intrinsic part of it… I was so pleased that our lead actress could also be the lead singer in the film score; the whole thing knitted together," said Price.

Regarding the authentic 60's arrangements of songs "Downtown" and "Your My World" performed by Taylor-Joy, Price said, "my thought was, imagine if Sandie's dreams come true and she got to do those songs at Café de Paris for real. So, we did the proper numbers, everything period accurate in Abbey Road. We then wanted to do a unique version of Downtown, building on the audition Sandy performs in the film. We recorded a new slowed down version, combining the orchestra and textures of the film's score to create a haunting new take on the song."

It's all in service of meticulously creating a musical soundscape that supports Wright's beautifully created world – or perhaps worlds – and this thrilling, chilling, story of following your dreams wherever they lead you, and the nightmares that can result.