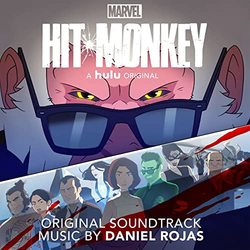 Marvel Music/Hollywood Records has released the digital soundtrack from the Hulu Original Series Marvel's Hit-Monkey today. The album features an original score composed and produced by Daniel Rojas. All 10 episodes of Marvel's Hit-Monkey are now streaming on Hulu.

Commenting on his score, Rojas said, "The music on Hit-Monkey is really special to me because it allowed me to blend a lot of scoring styles, from subtle electronic undertones to big orchestral action sequences, and infuse them all with a modern production twist - which is what I love to do. There's a lot of comedy in it but the show feels very cinematic and Marvel-worthy in scope, so that gave me the chance to write pretty big and aggressive music at times. It was also a lot of fun to find ways to complement all the great songs that Kier Lehman and James Cartwright found for the show, which go from old Japanese tunes to grunge and punk-rock."