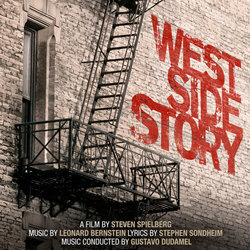 Hollywood Records is pleased to announce the release dates for the soundtrack from the highly-anticipated film West Side Story, directed by Academy Award winner Steven Spielberg, from a screenplay by Pulitzer Prize and Tony Award winner Tony Kushner. West Side Story tells the classic tale of fierce rivalries and young love in 1957 New York City. From 20th Century Studios, The Walt Disney Company will release West Side Story in U.S. theaters on December 10, 2021.

West Side Story has been adapted for the screen from the original 1957 Broadway show. Original choreography by Jerome Robbins, based on the stage play, book by Arthur Laurents, music by Leonard Bernstein, lyrics by Stephen Sondheim, play conceived, directed and choreographed by Jerome Robbins, lyrics by Stephen Sondheim, music by Leonard Bernstein.

Spielberg said, "I dedicated this movie to my father, but it was my mother's love of music, combined with my insatiable appetite to understand everything about movie making, that led me to start collecting motion picture soundtrack albums when I was young. I loved the West Side Story cast album from the first time I listened to it. As a kid I could sing every one of its songs by heart – and I did sing them, until I wore out the patience of my entire family. The score feels like it's always been part of me, and I believe that this is the greatest music ever written for musical theater. My sincere hope is that young people out there find this album and fall in love with it as hard as I did."

The West Side Story Original Motion Picture Soundtrack features 21 songs from the film and will be released in both standard digital and physical (CD and vinyl) configurations, as well as a digital release in Dolby Atmos Music – a new technology placing the listener inside the song in a spatial way, revealing every detail of the music with unparalleled clarity and depth. Both digital versions are available today. The CD will be available on Dec. 10 and can be pre-ordered here; the vinyl will be available in February 2022. Both physical versions will include liner notes by West Side Story Music Consultant, Oscar -winning composer John Williams.

Gustavo Dudamel - renowned music director of the Los Angeles Philharmonic, the National Youth Orchestra of Venezuela and the Paris Opéra—was engaged to conduct the orchestra for music recordings. The music was performed by the New York Philharmonic with additional music performed by the Los Angeles Philharmonic. David Newman, a celebrated arranger and conductor who has worked on more than 100 movies, handles both arrangements, as well as some conducting. Dudamel said, "West Side Story for me, as for all of us in the music world, is part of my DNA. Every single melody in it is so natural and easy for anyone to process. Naturally, it felt right to work with the New York Philharmonic, Bernstein's own orchestra, and have the musicians be part of the new chapter of this masterpiece."