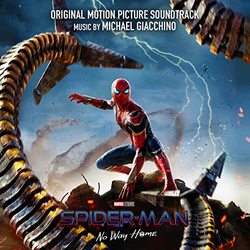 Sony Music Masterworks today releases Spider-Man: No Way Home (Original Motion Picture Soundtrack), an album of score music written by composer Michael Giacchino for the latest installment in the Spider-Man franchise. Available everywhere now, the album returns the Oscar, Grammy and Emmy Award-winning composer to the franchise, following his previous work on 2017's Spider-Man: Homecoming and 2019's Spider-Man: Far From Home. For the soundtrack, Giacchino continues to build on the sonic landscape he established with the first two films while encompassing new themes, resulting in an expansive score befitting the film's Multiverse setting. Based on the Marvel comic book by Stan Lee and Steve Ditko, Sony Pictures' Spider-Man: No Way Home is now playing exclusively in movie theaters.

Of the soundtrack, composer Michael Giacchino says, "It really has been special to take this three movie ride with Peter Parker and our talented director, Jon Watts. Over the course of the films, Peter grows from a typical teenager with everyday angst and awkwardness that so many of us had at that age, to a more confident young adult who understands his great responsibility. The added bonus of being able to travel and play with the multiverse brought me back several years reminding us all why we all love this character in the first place. It was an honor to add to the legacy of your friendly neighborhood Spider-Man."