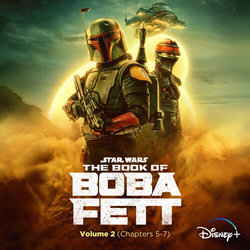 Commenting on his score Shirley said, "The Book of Boba Fett Volume Two highlights the different worlds colliding throughout Chapters 5-7, as well as some anticipated Bonus Tracks. Musically, it follows Boba Fett, Fennec Shand, Din Djarin, Grogu and Master Luke, as they band together to save Mos Espa. Jon Favreau and Dave Filoni have written a wonderful climax to this season, that I wanted to capture musically as everyone's themes become intertwined, broken down, and built back up. Ludwig's themes from The Mandalorian, and an occasional quote of the great John Williams; everyone has a moment in this overarching collection of score!"

The Book of Boba Fett, a thrilling Star Wars adventure, finds legendary bounty hunter Boba Fett and mercenary Fennec Shand navigating the galaxy's underworld when they return to the sands of Tatooine to stake their claim on the territory once ruled by Jabba the Hutt and his crime syndicate.