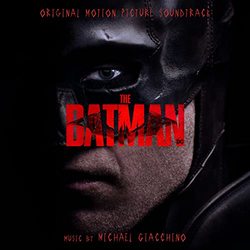 Watertower Music is delighted to announce today's release of the soundtrack to director Matt Reeves' hotly anticipated The Batman, which stars Robert Pattinson in the dual role of Gotham City's vigilante detective and his alter ego, reclusive billionaire Bruce Wayne. The film is set to open in theaters in North America March 4, 2022 and internationally beginning 2 March 2022.

The Batman (Original Motion Picture Soundtrack) features the music of Academy, Emmy and Grammy Award-winning composer Michael Giacchino. It's the fifth film Reeves and Giacchino have collaborated on.

The release of the soundtrack comes just days before the film's release, and follows WaterTower Music's campaign over the past several weeks of digitally releasing three of Giacchino's powerful musical character themes, each of which has captivated fans across the globe. The first music to be heard from The Batman (Original Motion Picture Soundtrack) was, in order of release: The Batman, The Riddler, and Catwoman.

"I love working with Michael Giacchino, he's one of my favorite people." Explained The Batman director Matt Reeves. "So, when I got The Batman, I went to him knowing he has the same kind of love and connection to Batman that I do. He told me he wanted to do what we'd never been able to - to record before I ever shot a frame. He said, 'I want us to record a suite, as if it was the unknown Beethoven Sonata of Batman that was found, and we use that to score the entire movie.' I was excited about it, so he started writing while I was still writing, and he would send me little sample recordings of pieces he was doing on the piano."

Reeves said that later, "the night before Robert (Pattinson) was to screen test, Michael sent me this incredible suite which contained the Batman theme - he had put it together with an orchestra - and I was blown away! It was so emotional. I drove to the set, and (The Batman producer) Dylan Clark was there, and I said to him, 'You have to get in the car.' He sat in the passenger seat, and I turned up the music. The two of us literally cried. He, too, felt it was amazing.

"I just felt like this was a very special, fated day, because Robert was about to be in one of the classic Batsuits, we were going to shoot some scenes, and there we were listening to this perfect music," Reeves continued. "Suddenly you felt you were about to be part of film history that meant so much to you and meant so much to everyone. That music helped Robert Pattinson to become Batman, and we listened to that music all the time."