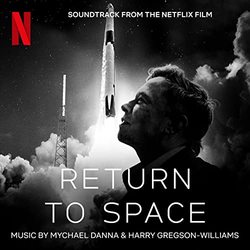 Netflix today releases Return to Space (Soundtrack from the Netflix Film) with music by acclaimed composers Mychael Danna and Harry Gregson-Williams. The soundtrack marks the first collaboration between Mychael Danna and Harry Gregson-Williams. The documentary feature film Return to Space debuted globally on Netflix on Thursday, April 7th and is directed and produced by Oscar-winning filmmakers Elizabeth Chai Vasarhelyi and Jimmy Chin. Return to Space covers the inspirational rise of SpaceX and Elon Musk's two-decade effort to resurrect America's space travel ambitions. Offering rare access inside the first crewed mission launched from U.S. soil since the retirement of the Space Shuttle in 2011, this is an intimate portrait of the engineers and astronauts chosen for the historic moment. Return to Space is produced by Anna Barnes and executive produced by Matthew Hamachek.

Of the soundtrack, composer Mychael Danna says: "Return to Space was indeed just that for me personally: one of my first scoring jobs ever was to be the composer-in-residence at Toronto's McLaughlin Planetarium back in the late '80's - early 90's, where I wrote many hours of music to accompany the star shows and space documentaries there. It was truly a pleasure to return to this extra-terrestrial musical spacescape, alongside my dear friend Harry Gregson-Williams. Harry and I had been looking for a project to collaborate on (and get a break from working with our respective brothers haha!), and when Jimmy and Chai approached us, whose work we had long admired, we knew this was the one for us! Using analog and digital synths, old tape machines and FX boxes paired with orchestral colours, we painted in bold style to portray the daring style of Elon Musk's brave missions."

Of the soundtrack, composer Harry Gregson-Williams says: "Return to Space presented me with the unique opportunity to not only work with my longtime friend Mychael Danna but to collaborate with two of the most highly respected documentary filmmakers in the business in Jimmy and Chai. The scope of music required for their film presented a huge challenge to us and was one that we threw ourselves into keenly. Our aim was to create a score with the sonic and emotional range that would reflect the daring and dynamic nature of Musk's space program, his unwavering belief in its validity and the extraordinarily determined and dedicated team he gathered around him."