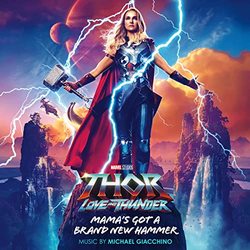 An advance listen of the main suite theme Mama's Gotta Brand New Hammer from the forthcoming Marvel Studios film Thor: Love and Thunder is available today. Themes are composed and produced by Oscar-winning composer Michael Giacchino with score by Giacchino and Nami Melumad. The digital soundtrack is set for release on July 6. The film opens in U.S. theaters on July 8.

Commenting on the track Giacchino said, "The first piece of music I wrote was the Thor: Love and Thunder suite, which appears on the soundtrack as 'Mama's Gotta Brand New Hammer.' It's basically one part heavy metal, one part electronic, two parts British brass band and a dash of Hollywood strings for garnish."

Giacchino continued, "There's a point where the track suddenly transitions from orchestral to rock, and when I played it for the first time for [director] Taika [Waititi], he abruptly stood up and began playing air guitar. It was really important that this score was able to emphasize the emotional moments as well as the fun ones—and after Taika's spontaneous reaction, I thought that this mixing of musical flavors just might work."

The film's main theme has two parts, said Giacchino: one for Thor and the other for Jane Foster. "Thor's theme is noble, mostly played on horns," he says, "and Jane's theme is more reflective, often represented by a solo cello. There's an unexpected harmonic change between the two, and I did this to convey the effect Jane has on Thor's life. She causes him to look within himself, and she brings out parts of him that he may not have known were there. So, while Jane's theme is similar and connected to Thor's, it offers a new perspective."