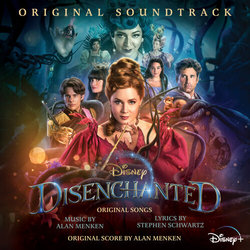 The film's single Love Power (End Credit Version) performed by Idina Menzel, is produced by Lindgren & Ryan Tedder and mixed by Curtis Douglas. Disenchanted producer Barry Josephson comments, "'Love Power' is a beautiful ballad that tells an integral part of the story. Nancy encourages Morgan to find love and embrace Giselle. It is an opportunity to grow Morgan's character and bring her closer to Giselle in their mother-daughter story."

Menzel describes the song as "a beautiful musical reminder of everything that matters most in the world: savoring the moments and the memories. It is not always about the perfect, glossy, shiny fairy tale. It is experiencing the ordinary moments, the intimate moments, that change us. It is about understanding that life is not perfect, but when we go through struggles and traverse roads together, that's true love."