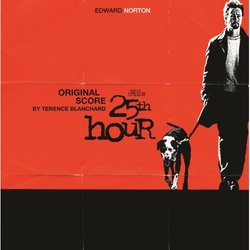 Make no mistake, this is a fine score.  In fact, it joins that rare list of scores that outstrip the movie they accompany in artistic achievement, creating an odd dynamic in which the images support the music rather than the opposite.

For 25th Hour, Spike Lee returned to New York and to his frequent collaborator Terence Blanchard.  The New York Lee found was still reeling from the attacks of September 11th, the hole in the skyline an invisible reminder of loss.  As metaphor for that loss, we have the character of Monty Brogan, played by Edward Norton, about to lose the life he knows by going to prison at the end of the day.  In Blanchard, Lee found a musician capable of dealing with the multiplicity of emotion he wanted to depict.

I have always enjoyed the way Lee uses music in his pictures.  Although the place of rap in movies such as Do the Right Thing is more celebrated, I am intrigued by his use of the orchestra.  It is often very subtle, but the sound of strings is in every one of his pictures, a sound that in many minds represents the elite of society undergirds images of minorities (consider, for instance, the use of Aaron Copland's music in He Got Game, a relationship I am still attempting to decode).  What is most amazing is how well it all works, showing Lee to be an extremely musical director.

The score opens with all the elements of this basically monothematic score in play.  A steady downbeat of percussion and low pizzicato strings marks time while strings mournfully intone the main theme.  Behind this theme float the wordless melismas of Cheb Mami, a singer best known for his collaboration with Sting on the song "Desert Rose."  The incessant march of the downbeat is unswerving throughout the score, providing not only propulsion but apprehension as well.

Even though he has scored most of Lee's pictures, Terence Blanchard is still best known as a jazz trumpeter.  His roots, however, are muted here, only brought out for special emphasis.  Consider the fourth cue, "The Apartment #1," which features moments of a light, jazzy piano over bass and percussion breaking through only to be lost again in the elegiac flow of strings.  The combo returns full force two cues later in "Fu Montage" and we hear its theme mixed with the strings and transformed into a web of contradictions.  On the one hand we have dread, Doyle's dread as he prepares to leave for prison and the city's dread as it continues to mourn the losses of September 11th.  On the other hand we have the happiness of Brogan's life before, but paradoxically that existence, represented by the appearance of jazz rhythms, only adds to the oppressiveness of that original string theme.

The main theme returns in the jazz ensemble in two other cues, "Playground" and the final cue "Double Happiness" where it receives full treatment without the aid of strings.  The theme's malleability is remarkable not only in color and rhythm but also in emotion and this facet makes listening to the score a pleasure rather than a monotonous bore.

Without a doubt, however, the score's most powerful cue is the eighth, "Ground Zero."  Blanchard has created a musical portrait of the events of September 11th and their aftermath with Cheb Mami's Arabic-flavored vocals standing in for the terrorists of al-Qaeda and Northumbrian pipes representing the New York Fire and Police Departments.  After an initial outburst of these vocals and pipes, the cue diminishes to a subdued statement of the relentlessly sorrowful string theme.  This level is maintained until in the last minute when a crescendo builds to a series of snare drum hits that shoot right into your gut.  The energy then continues to build with the two elements of vocals and pipes waging a sonic battle backed by dissonant string and brass clusters until it all simply stops, the pipes dying away with nothing resolved.  Obvious and manipulative?  On paper, yes, but in execution handled perfectly.

While not a light and breezy listen, 25th Hour is a rewarding one.  And though most of the accolades directed toward it are probably based on the "Ground Zero" cue and Blanchard's unique use of jazz, the rest of the score shows how to effectively capture a mood and draw an audience into it.