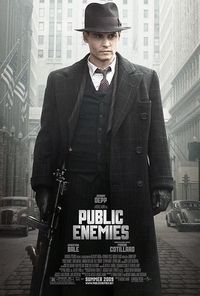 After Purvis chased down and killed Floyd, FBI Director J. Edgar Hoover (Billy Crudup), in an effort to boost the agency’s reputation, assigning Purvis to the Chicago area where he is to focus on apprehending Dillinger, who with his gang are continuing their spree of bank robberies.  Soon Dillinger meets a coat-check girl, Billie Frechette (Marion Cotillard) and the two eventually fall in love.  When Dillinger starts associating with people close to Al Capone’s right-hand-man, Frank Nitty (Bill Camp), the heat starts to turn up, and soon Dillinger finds himself captured and arrested – and after a daring daytime jailbreak, is one of the most wanted men in the country.  It’s like a game of cat-and-mouse as Purvis and his G-Men keep picking up the trail, and Dillinger keep slipping through their fingers. But with the pressure building, the places he can run are dwindling and it’s only a matter of time before the final confrontation between Dillinger and Purvis.

I’ll be blunt here – Michael Mann has a great film in Public Enemies, but tinkers with it so much on a technical level that in the end, it’s only a good film.  That is to say, the movie succeeds in spite of Mann.  The actors are all top notch, and the writing is quite good.  But there are some major tech issues.  First, he shot it digitally.  I have no problem with that, but in 2009 it’s inexcusable for a film that is shot digitally to look as cheap and video-like as the way this film looks.  I don’t know for sure, but it certainly felt like it was shot at 30fps.  Then there’s the sound.  Volume levels are terribly inconstant, with dialogue shifting in mid sentence, and some scenes feeling too quiet (like the projectionist was dialing it down) and other scenes nicely immersive and loud.

And even more disappointing was the music.  Oscar-winning composer Elliot Goldenthal’s first film score in six years was sure to have high expectations.  Especially after his excellent collaboration with Mann on Heat.  And yet, even after the (reported) hours of music written and recorded (and re-written and re-recorded), it seems to me that Goldenthal was pushed into the temp score.  If Michael Mann really wanted the scores from The Thin Red Line and The Dark Knight, then why didn’t he just hire Hans Zimmer?  Instead, we end up with a disappointing score by Goldenthal that I doubt is anything close to what he would have brought to the table if left unhindered.  The music editing is terrible too – cues suddenly cut off in the middle of a musical phrase, and it just feel amateurish.  Word is that Mann was tinkering with the film up until the release, and is still tinkering as we speak, and the home video release will be a different version than the theatrical release.  The songs in the film work well, and it’s a nice well rounded soundtrack to listen to.

Ultimately, Public Enemies is a good film – it should really be a great film, but the technical malfeasance drops it down, and I am hard pressed to recommend it until home video – when (hopefully) Michael Mann has finished the darn thing.