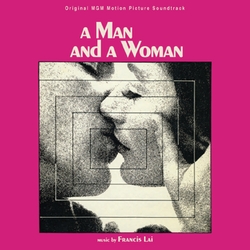 A Man and a Woman

Is there a person anywhere in the world who was around in the 1960s and 1970s who could not instantly recognize the theme from A Man and a Woman? Doubtful, unless you were living under a rock in a cave in Siberia, and even then you'd probably have heard it. In fact, it became one of the most beloved movie themes ever written almost instantly. It was the right theme from the right film at the right time. Upon its release in 1966, A Man and a Woman became a sensation everywhere it played. It became the film to see for anyone who considered that they had a romantic bone in his or her body. The soundtrack recording was as popular as the film, so popular, in fact, that a second soundtrack album was released with the lyrics in English (sung by the same singers as the original French). The film was fresh, unique, and beguiling, and so was its score by Francis Lai. It was the perfect marriage of image and music.

A Man and a Woman was only Lai's third film score, but it put him on the map and he has not stopped working since, and that includes scoring close to thirty films for director Lelouch. Just a few short years later, in 1970, Lai would win the Oscar for Best Score for Love Story. His music for A Man and a Woman speaks for itself—the melodies are stunningly beautiful. Part and parcel of the score are the wonderful vocals of Pierre Barouh and Nicole Croisille, along with Barouh's lyrics. The score and songs have been loved by lovers all over the world and with good reason—this is simply some of the most romantic and heartfelt music ever.

A Man and a Woman was originally issued on a United Artists LP. With its extreme popularity, United Artists then issued the English language version. There have been three previous CD issues of the French version—two imports from Europe and a stateside release by DRG. However, all three were issued from sources many generations away from the original album masters, and, shockingly, all three were in mono. We are pleased to finally present the first authentic presentation of A Man and a Woman on CD—in stereo from the original album masters housed in the MGM vaults, in both French and English versions. It's such a pleasure to hear the score as it was meant to be heard.