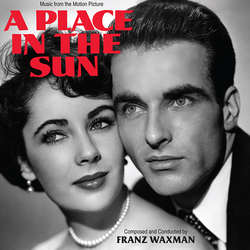 A Place in the Sun

It would be difficult to imagine A Place in the Sun without its brilliant Franz Waxman score, distinguished by what is surely one of film music's most beautiful and exquisite main themes.

The heart and soul of Waxman's score is "Vickers Theme," and it recurs throughout the score in many guises. It's a stunning theme and one that captures the essence of the film with sublime perfection. But all of Waxman's music for the film is sublime—there's really not much more to say than that because the proof is in the hearing. This is film music as film music is meant to be—not padding, not filler, not sound design—film music designed to underscore the images on screen, the characters, the drama.

The film was shot in 1949 and was originally going to be released the following year. However, Paramount delayed release until 1951 so it wouldn't have two blockbuster hits competing against each other in the 1950 Academy Awards (the other blockbuster being Billy Wilder's Sunset Blvd.).

The delay in release enabled director George Stevens to keep tinkering with the editing and, in so doing, he decided that a few cues would need to be re-scored. Since Waxman did an astonishing seven films in 1951, it was probably impossible for him to do the re-scoring himself, so Daniele Amfitheatrof and Victor Young were both enlisted to perform the task. Both composers honored and adhered closely to Waxman's music. It's probably safe to say that it's not really possible to think of film music without thinking of the name Franz Waxman. He was simply the crčme de la crčme, and A Place in the Sun is one of his true masterworks.

This world premiere release of the surviving A Place in the Sun music masters stored in the Paramount vaults—augmented by a couple of cues from the music and effects tracks—adds up to over fifty-one minutes of glorious music. Our wizard audio restoration man, Chris Malone, did amazing work on the cues taken from the masters, and—for the others—was somehow magically able to keep the music and eliminate the effects while never compromising the audio quality. Several cues are in the original form in which they were written by Waxman, and some are the re-scored versions. This release is limited to 1000 copies only.