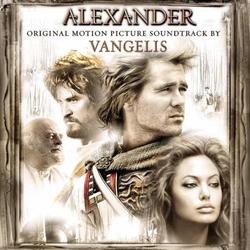 It's always difficult to review a score to a film that hasn't been released yet. But Alexander promises to be one of the best films of the year. With Oliver Stone at the helm and a solid cast including Colin Farrell, Anthony Hopkins, Angelina Jolie, and Val Kilmer, this telling of the young Macedonian King's conquests should deliver the goods. Providing the music for this mythic tale is Greek composer/performer, Vangelis.

As he did on 1492: Conquest of Paradise, his last major score, Vangelis uses ethereal voices, percussion, and string instruments in combination with his regular synth melodies to evoke the feeling of an ancient world. On the majority of the cues, it works extraordinarily well. The main theme featured in "Titans" and reprised again in "Dream of Babylon" provides an epic and triumphant motif for the legendary figure. With a chorus punctuating each musical phrase, it's as if the gods are walking upon the earth.

In the equally memorable "Drums of Gaugamela", depicting the last battle between Alexander and the Persian king, Darius III, Vangelis does something he's never quite done before: he's created a rousing and exciting action cue. As the title suggests, this cue is percussion driven from beginning to end. What makes it such a stand out cut is how it progresses from featuring female voices to bold battle music to a male chorus and then back to the pounding action motif implying a hard fought victory.

On "Eastern Path", Vangelis uses the sounds of an Armenian duduk, as Zimmer did so well with Gladiator, to create a melancholic and haunting cue. After years of victory and conquest, Alexander experienced one of his first military setbacks near the Indian frontier when his officers refused to go any further. "Roxane's Dance" affords the composer a chance to use Middle Eastern instrument sounds in creating an enchanting and seductive melody for the introduction of Rosario Dawson's character. On the brief "Chant", deep low male voices are used to create an air of darkness and mystery.

The rest of the cues on the album all work fine and stand on their own even without having seen the film. If there is a misstep, it's with "Roxane's Veil". This cue is clearly at odds with the rest of the score in that it sounds very modern. In fact, it sounds like a track taken from one of his last couple of albums, Voices or Oceanic. Replete with a programmed new age beat, its sound and tone clashes with the feeling created by the other cues.

Working off of great material, Vangelis has scored himself another victory. Strong themes, haunting melodies, and the ever present feeling of a vast army always on the march make the album immensely enjoyable. It is clear that Vangelis has not lost his touch in creating memorable film music in addition to his various side projects. This album is a fitting companion piece to his score to 1492: Conquest of Paradise. Highly recommended.