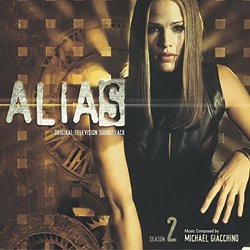 I don\'t do this too often, but I sometimes change my star ratings on second listens. Reviewing these things isn\'t anything resembling science, just one guy\'s opinion. Listening to "Alias: Season One" again, I realized it\'s better than I first reviewed it - and I liked it quite a bit the first time. Following the success of The Incredibles, more people have been tracking down other works of Michael Giacchino, including this album to the second season of the spy melodrama series "Alias".

Chronicling the further adventures of Sidney Bristow, the Season Two album is less bombastic than the first one, dedicating much more time to more dramatic cues (such as "Mother of a Mother", "Emily\'s Eulogy", "Post A-Morten"). These cues reveal the widening range for Giacchino\'s composing skills, which grow year by year. The orchestra clearly sounds fuller than the last album. There\'s still plenty of rocklickin\' tracks ("Over The Edge", "Something Fishy") which tend to split between the James Bond electronic ("Going Down?") and the show\'s trademark ethnic-techno blend ( "Rabat"). The tracks are also rather humorously titled "I\'m So Promoted, "I\'m So Screwed" and "I\'m So Demoted").

No one would argue that Giacchino is going to be a big name in film composing, but I\'m looking forward to when he develops his own sound that does not rely so strongly on John Barry and David Arnold influences. Some pieces of this potential reveal themselves, especially in the last part of the album ("Sloane\'s Revelation," "Balboa and Clubber") .

As the problem typically is with television score albums like this, individual tracks are pulled from episode to episode, so it is more a sampler of his material, rather than a full dramatic piece. I admit this is nit-picky and neither of these points are real negatives to fans of Giacchino or the show, who will definitely want to pick this up.