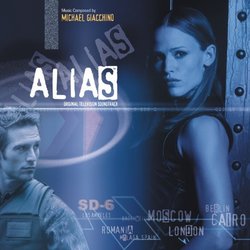 The only TV shows that have excited me in quite a while have been 24, The Shield and Alias. Key to their enjoyment is that they don't feel like television. They have none of the TV status quo storytelling where character's actions have no consequences and main characters rarely die. These shows are more like hour-long movies. A combination of Felicity and James Bond, Alias has Jennifer Gardner's Sydney Prescott alternating alliances, identities and to keep herself, her family and friends alive in a world of international espionage. The show is so relentlessly entertaining because it moves so breathlessly fast from one situation to the next. And the music is a big part of it.

The biggest credit in series composer Michael Giacchino's resume outside of video game soundtracks is for a movie that hasn't come out yet. (That being the next Pixar movie, the superhero spoof The Incredibles, coming out in theaters this November.) Until then, this compilation album is his first formal introduction a lot of people. And while the music is not always original, it definitely catches one's attention.

If I had to narrow this CD down to a blurb, the music here is David Arnold's Bond work meets Run Lola Run. I actually got to see the original pilot before the show got picked up for its first season and not surprisingly, the temp score for the episode was mostly Tom Tykwer's music from Run Lola Run.  And that obviously translated over to the final score.

Giacchino is a thief, but he's a wise thief and never lingers too long on any specific style:  Prodigy and Crystal Method are clearly in there. "Ball Buster" co-opts Meat Beat Manifesto's "Leave You Far Behind."  "Sleeping Beauty" has the Dwayne Eddy guitar riffs and John Barry horns. There's even James Horner's ominous horns in "Ball Buster" or aping a piece of Glory in the "The End?" Since the show travels quite a bit, there are tracks like "Tunisia", "On to Paris", and "Spanish Heist" that will drop in an ethnic short hand (a Spanish guitar or a French vocal) along in the techno. Most of the time, when a television series uses electronics, it is to save on the costs of using actual musicians. When Giacchino wants to bring in the orchestral color, he does so quite elegantly. This in no way sounds like your average television soundtrack.

As with a lot of television show score albums, this album shows little dramatic development, as individual tracks are pulls from separate places.  In a clever side note, the theme of the show was written by series creator J.J. Abrams, undoubtedly setting the tone that Giacchino would follow.