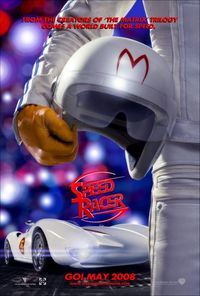 Just when it seemed that the trend of creating live-action film adaptations of animated television shows was starting to wane, along comes Speed Racer, the Wachowski Brothers\' attempt at bringing a classic anime to life. After the seemingly tragic death of his brother Rex Racer, Speed Racer (Emil Hirsch) is determined to be the best race car driver out there. When he nearly breaks Rex\'s record at the Thunderhead race course, he gains the attention of Royalton (Roger Allam) who wants Speed to join his corporate racing family. When Speed refuses, Royalton sets out to destroy the Racer family - but Speed (along with his trusty girlfriend Trixie, played by Christina Ricci) is determined to restore the good name of his family, by winning the Grand Prix. But to get into the race, he needs to first win the dreaded Casa Cristo cross-country race, which doomed his brother Rex. Meanwhile there\'s a whole secondary plot about a corruption investigation in the racing community, involving stock price manipulation (yes, that\'s right), and the mysterious Racer X (Matthew Fox) enlists Speed to help bring down some of the baddies.

Speed Racer boils down to this. It\'s a film best suited for fans of the original anime show, or young teen males with ADD on a sugar high. If you don\'t fall into those demographics, you\'ll likely find plenty of issues with the film. The problem is, it\'s visually inconsistent, a bit of a mess, and too limited to reach a broad audience. The plot meanders a bit, especially towards the middle (come on, stock price manipulation??), and some of the action sequences are pretty cool, but it\'s so fast and choppy that you can\'t tell what\'s going on half the time. (It\'s like Michael Bay was an editing consultant!) Some of the visual effects are amazing (the nighttime race sequences at Thunderhead look especially good), but then there are sequences that look flat, with horrible compositing and a bizarre over-saturated 2D/3D effect, like cardboard cutouts. It might be harsh of me to say that Speed Racer is like \"Spy Kids 3D stretched out through the creative vision of the Wachowski Brothers to a bloated 135-minutes\", but that\'s really all I kept thinking.

The acting isn\'t helping either. Everyone plays it so seriously, that it just borders on the absurd at times. Worst is the seemingly derivative and dumbed down comedy stylings of Spritle (Paulie Litt) and Chim-Chim. Yes, it\'s a real monkey, we get that. But we just don\'t care about what they do, and the intercutting of their non-essential plot lines gets annoying. Only 7-year olds would care, but even they would probably find it tedious after a certain point. And the use of Chim-Chim goofing off over the beginning of the end credits sequence is a direct indication of who they targeted this film for.

The music by Michael Giacchino uses the themes from the television show, but work really well in the film. The driving ostinatos add even more energy to the sequences, and the album is a lot more fun than the film.
Some of the race sequences are cool, but the use of oversaturated color, and the unnecessarily confusing plot about stock manipulation combined with the very simple storyline makes Speed Racer a rental. Your retinas will thank me.