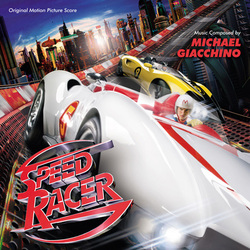 People are lining up on opposite sides of the fence on this movie, loving or hating it with a unique amount of passion. For me it boils down the voice of the movie\'s main villain, Royalton (Roger Allam). He plays the role as if he was dubbed from Danger: Diabolik. Any movie that does that gets my vote though I have to admit they had me at monkey. The Wachowski Brothers do nothing half way in this visually insane adaptation of the late 60\'s Japanese cartoon. If there\'s any question of how much they love the source, listen to the closing credits track (\"Speed Racer\"). It is a pitch perfect update of the opening/closing TV credits that intercuts the loop \"Go Speed Racer!\" next to the original Japanese \"Mach a-Go-Go!\"

One of the bolder moves of Speed Racer is to tell the story in overlapping timelines, so that a sequence can be cutting between 2 or 3 events or periods, flashing forwards or backwards in a whiplash speed. Likewise, the movie may quickly switch tone from family drama to broad comedy to action and back again. Michael Giacchino guides it along masterfully. He switches styles and references constantly, but it is always sincere.

Of course he uses the famous Nobuyoshi Koshibe theme. Love goes beyond what he does with it. To use an elaborate metaphor, Giacchino takes the theme apart like a custom built car and uses every part, organically rearranging the little pieces as various leitmotifs throughout the movie. The full eight note fanfare becomes the main theme which he then emphasizes lovingly in \"Racing\'s In Our Blood\", in a rousing fashion (\"Go, Speed, Go\") or triumphantly (\"Let Us Drink Milk\"). Meanwhile the Four-note \"Mach-a-Go-Go\" is then weaved through the action scenes (\"Thunderhead\", \"Caso Cristo\"). In \"Milk\" especially, he takes the rising three-note pattern of \"Here He Comes\" and uses it for a rousing brass repetition that goes higher and higher until the entire orchestra takes up the \"Go Speed Racer Go\" section with a full choir. He\'ll dance around the fragments in a montage like \"32 Hours\" playing the three-note in opposition to the four-note which then contrasts with the Royalton theme. It’s killer stuff.

And that\'s just the tip of it. Giacchino mines the entire late 60\'s for other pastiches. \"Vroom And Board\" uses classic 60\'s TV cartoon light strings and xylophone. No one else nowadays seems to know how to use a xylophone like him. Giacchino develops some great smaller themes like the Rex motif (\"Tragic Story Of Rex Racer\") and the family motif (started in \"World\'s Best Autopia\") both which use a steel guitar, driving percussion and rising/falling strings. He also creates a nice Bond-styled bad guy motif for Royalton that starts playful (\"Vroom And Board\") and then gets mean (\"True Heart Of Racing\"). Giacchino ties it all together in \"Reboot\", which takes the previous themes and blends them together into an overwhelming choral climax very reminiscent of Don Davis’ Matrix work.

No one is arguing the greatness of Giacchino\'s work, which is easily his best since The Incredibles. I\'m leaning towards saying it may be even better, but I\'m not that bold yet. Giacchino set a high watermark with that score and everything he\'s done since has been under its shadow. I\'m a big fan of Mission: Impossible III and Ratatouille. Individual cues were top-notch but on a whole, both scores didn\'t have development. Here you don’t feel he’s trying to pull off a trick (now I’ll do Barry or Schifrin or Mancini). Like the best scores, the parts unify and this may be the best adaptation of a TV theme I’ve ever heard.

From the recording sessions that were previewed online previewed last month, it\'s clear we\'re not getting everything but this is a very representative one-disk release. We\'re losing about an hour of material I hope comes out down the line (I especially miss the Casa Cristo finale). Then again, I could say the same about a lot of Giacchino’s work.

Not even halfway through 2008, I\'ll say this is one of the best scores of the year.