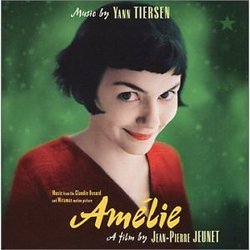 Now I have to predicate my review in mentioning that I had all but good intentions of seeing this film this weekend. However, with only one theater in the Metro-D.C. area showing this film, and that theater being some distance away, I'm opting on waiting to see it for a few more days. However, from what I've read, heard, and in the case of this review, listened to, I recommend that you shouldn't skip it if it's available in your area. Amelie (or Le Fabuleux destin d'Amélie Poulain as it was released in France in April), a film by visionary (and that word is true in this case) director Jean-Pierre Jeunet, and scored by musician Yann Tiersen is, to say the least, a stunning visual feast with a simple but interesting story tying it all together.

Jeunet's previous films included Delicatessen, City of Lost Children and, yes, Alien: Resurrection, and each were, to put it lightly to those who really "looked" at the film, were eye-ball overloading, sense tingling, art-on-film exposes. Most people who've I've spoken to about his previous works really didn't know what to say about them because, in their own little way, they were hard to wrap a simple description around them.

The film Amelie is a story of a rather bored cafe waitress in Paris who is attempting to find some meaning and direction to her life. A miraculous change takes place (finding a hidden box of photos and mementos) which sends her on her way to making that change and helping others around her do the same. To a point, this looks to be a correctly done version of Pay It Forward with smart special effects and visuals akin to Heavenly Creatures. I'm enthralled with the lead actress, Audrey Tantou, which in a couple of shots, mirrors, somewhat, her namesake, a young Audrey Hepburn. I'm sure most people who've seen recent imports such as Crouching Tiger, Hidden Dragon and Life Is Beautiful, will be more at ease to this film with subtitles (the dialogue is in French) and should enjoy it just as much, albeit in different ways. For those who are not familiar with any of previously mentioned films and absolutely can not watch a film with subtitles, I would recommend a pass and say to go see Monsters, Inc. again. Otherwise, I'm sure this will be one of those hidden year-ending gems that will be enjoyed again and again by the small audiences who were audacious enough to take a chance and discover it.

I absolutely love Yann Tiersen's score to this film. There are a few "songs," but they add a bit to the film rather than detract much the way songs are typically applied to American films (actually they are older non-film specific pieces), and Tiersen's music just evokes exactly what a good score would, and should, do for a film. I would have to say this is exactly the kind of music I would have narrating a visit to Paris, no matter how stereotypical it may sound. This is a traditional sound, and it feels authentic, a real gentle, fun and heartfelt piece of music. There is an Amelie theme, heard in "La Valse D'Amélie" and it's various incantations on the soundtrack. It's a jaunty and lighthearted piece of music, something that puts a smile on your face just listening to it. Even the more serious pieces on the album lend to a bit of whimsy, mainly through the associated orchestrations. Composer Yann Tiersen is also the primary musician on the majority of the tracks on the soundtrack, playing all the instruments except for pieces that require special percussion or a fuller orchestra feel (mainly with strings). I haven't really been able to find much fault, outside of some repetition, in the score, and the songs inserted also work, much in the same way Charles Trenet's "La Mer" worked in the opening titles for L.A. Story and Yves Montand's "Rue St. Vincent" worked in Rushmore. The music helps mostly set the scene and punctuates the whimsy in the film, but also helps mirror Amélie's emotional growth during the film. You can compare the localizing of this score to France much in the same way Life Is Beautiful was localized to Italy, helping to set a musical sense of culture and geography, without slamming it into your face. The orchestrations are key, and they do their job well. Because of this work, I've been inspired by this album to seek out Tiersen's solo work that inspired director Jean-Pierre Jeunet to select him for this picture, and I would hope fans of this film will eventually stumble along this same discovery.

This film just recently won the Toronto International Film Festival's top award, whose last few winners put it in good company, such as Crouching Tiger, Hidden Dragon, American Beauty, and Life Is Beautiful. All of those films had excellent (and award winning, too) scores, and Amelie is no exception to that trend. With such anticipated scores as Harry Potter and Lord Of The Rings being released at this time, I think Amelie offers a comparable, albeit more subtle, run for the money, if not as widely known and promoted. I would hope that come Oscar (and Golden Globe) time, that we will see Tiersen's score listed among the nominees for the award, if not coming close to winning it in the same style and with the same charm that won me over.