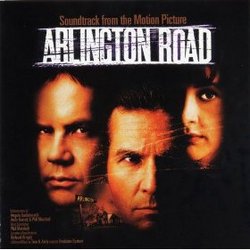 One of the darker films Angelo Badalamenti scored in 1999 was Arlington Road. The story followed the downward spiral into paranoia of Michael Faraday, a professor who is convinced that his neighbors are not who they claim to be - and that a domestic terrorist attack is in the works. The score Badalamenti wrote was a very good combination of traditional orchestral melodies and themes, intermixed with atmospheric effects and percussive rhythms.

Beginning with the very atmospheric and creepy "Bloody Boy / Neon Reprise", the main title sequence is a fast cutting abstract montage sequence which helps establish the tone of the film. It should be noted that S. Shackleton & H. Saunders wrote "Neon Reprise". "Lament For Leah" is a great example of Badalamenti's more emotional side - strings and piano play a very sad, almost romantic, piece as Faraday remembers his wife, an FBI agent killed in an anti-terrorist shootout. "The Party", a great scene which showcases a moment of true paranoia on the part of Faraday, is filled with atmosphere beneath the orchestra, and electronic effects help accentuate the fear in the scene.

The bulk of the score tends to be orchestral cues, atmospheric-synth cues, or a combination of both. Most work very well in the film, but I found that the orchestral cues, such as "Values", tended to play better on their own. But the hard-hitting action cue "Stoplight Flight" and the climax of the film, "The Bomb" are two pieces that stand out on the album and build the tension very effectively. Additionally, Tom and Andy wrote the pulse pounding piece "What Message", and the very atmospheric and synth heavy "Copper Creek".

The film was similar at times to The Parallax View, but for the most part, it was an intriguing look at the possibilities of domestic terrorism today. The score that Badalamenti and the others wrote for the film worked exceptionally well in bringing that fear and paranoia to life, and it is represented appropriately on this 67-minute album. The instrumental themes that Badalamenti wrote are quite moving, and even though there is a lot of atmosphere and synth that isn't something to listen to, this album is definitely worth getting for the themes.