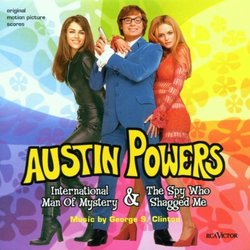 Austin Powers: International Man of Mystery & The Spy Who Shagged Me

Austin Powers: International Man of Mystery was a small film that only made around $30 million when it was released in 1997. Word of mouth spread, however, and it had a phenomenal success on video. When the sequel, Austin Powers: The Spy Who Shagged Me was released in 1999, it made more than $30 million in the first weekend! Both of those films poked fun at the secret agent film genre - most notably, the James Bond films. In addition to the jokes, the films boasted deliciously slick scores by George S. Clinton. Sadly, while three soundtracks were released for those two films, no score album ever saw the light of day. Until now.

As with most comedy scores, the cues tend to be rather short. Clinton has gone ahead and assembled the best of them into mini-suites, which provide a more comprehensive overview of his work - while also making it more pleasant to listen to. The first half of the album contains music from the first film, Austin Powers: International Man of Mystery. The music is filled with homage and references from the Bond films, the Flint films, and the Pink Panther films. Dr. Evil's Theme is primarily John Barry influences, with the expected "wall of brass" sound. "Vanessa's Theme" is a smooth Euro-styled cue with a slinky piano playing in a very Henry Mancini-inspired style. "Danger March" evokes memories of Goldsmith's works, as well as reminding us that Austin is, indeed, British. The action cues are tense and exciting, and the "Evil Orbit" cue ends on a rousing brass hit.

Austin Powers: The Spy Who Shagged Me has main titles that played out as the first film did - with Quincy Jones' "Soul Bossa Nova". For this second outing, however, Clinton recreated the piece, with a few minor additions, to fit the film. Now a string section adds a touch of MGM for a choreographed swimming number. It's all fun, and fits in seamlessly with the style of the song. Revisiting previously established themes was expected for this film, but Clinton took it a step further. "Felicity's Theme" is the natural successor to "Vanessa's Theme", and is played with a guitar instead of piano. "Chess", performed during the Thomas Crown Affair parody moment between Austin and Ivana Humpalot (the Russian spy), is a great satire on Michel Legrand's score for that very same scene. "Evil Island" has a sweeping string motif that at first reminded me of Stargate, which was odd, but then I realized that it was actually a jab at the You Only Live Twice theme. "The Shagga-nova" has a breathy, lusty saxophone solo that plays smoothly, before being taken over by an organ. The last track on the album is a combination of four cues, and runs about 3:47 in length - a good example of how short these cues really are!

With a running time of 39-minutes, it won't be too surprising to hear many people complain about how short it is, given that it's covering two films. However, the reuse fees were expensive, and (to be honest) many of the cues are so repetitive in the film that to put them on an album would prevent it from playing out smoothly and enjoyably. As a result, Clinton has picked the best cues that he wanted us to hear, and put them together in a nice solid package for us. It's unfortunate that this album didn't come out closer to the home video release of the second film, as it might not get the notice it so deserves. But I would have to recommend this one - it's definitely a fun album to listen to.