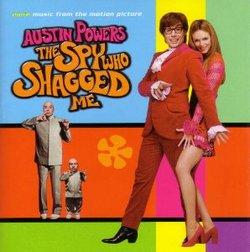 More Music from Austin Powers: The Spy Who Shagged Me

Review: More Music from Austin Powers: The Spy Who Shagged Me

With a few highlights and a few lowpoints, I can't enthusiastically recommend or steer you away from purchasing "More Music From Austin Powers 2: The Spy Who Shagged Me."

The highlights on the disc include "American Woman" by The Guess Who (aptly covered by Lenny Kravitz on the first installment of the soundtrack), Marvin Gaye's "Let's Get It On", The Zombies "Time Of The Season", and The Monkees "I'm A Believer". The low points for this reviewer are "Am I Sexy?" by Lords of Acid (I'm assuming that the "Acid" here is the popular Sound Forge audio application which allows talented engineers, but by no means songwriters, to puzzle together a - Doctor Evil quotations here - "composition") and "Bachelor Pad" by Fantastic Plastic Machine. Both "tunes" are strictly loop based. Admittedly, Bachelor Pad features a really cool bass part (looped and looped and looped), so it's at least listenable. "Am I Sexy?", though, is about as memorable as Super Bowl XXI. Quick! Who played in that game? See what I mean?

Madonna's remix of "Beautiful Stranger" is solid, as is the great little Bond-esque "Dr. Evil" by They Might Be Giants. George S. Clinton's "The Austin Powers Shagaphonic Medley" is deftly, and interestingly, orchestrated, but the pacing and structure of it leaves one wanting much more. More structure. More of a build up and breakdown. It seems to be a quickly thrown together string of themes that don't support one another all that well. Don't get me wrong, George S. Clinton is a wonderful composer/orchestrator… maybe he used Acid to assemble this medley. At least we can take solace in knowing that a score album of music from both Austin Powers films is due to arrive in early 2000.

In closing, all you PC and Mac "musicians" out there, please, step away from your monitors and get out and listen to some good writers. Wrap your ears around old tunes and new tunes alike. Be very aware of structure and pacing. Listen to the good and bad and be able to define why a song moves you or doesn't move you. Then, when you've increased your musical vocabulary (a daily necessity and process), and only then, sit back down at your computer and get back to work. You'll be much happier and productive for the effort.