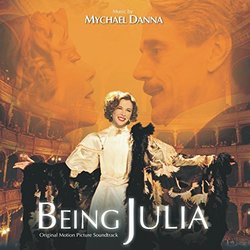 Being Julia, starring Annette Bening in the title role, is the story of an egomaniacal yet adorable stage actress in 1930s London who plots revenge after being heartbroken in the course of a May-December romance. That's really all you need to know to enjoy Mychael Danna's score, since that's all I knew when I started listening to it. Mychael Danna has earned his composing stripes working on an impressive number of Atom Egoyan's projects as well as some other lesser known, more character-driven cinematic pieces. He has proven he masters Far-Asian instrumentation (The Ice Storm, Green Dragon), urban soundscapes (Bounce, Shattered Glass), and the Middle East's soulful and barren sounds (The Sweet Hereafter) and here, with Being Julia, he showcases his talents in classical music with a playful, catchy nod at the Classical period, with a tad more gusto and dynamics than was typical of that era.

The soundtrack opens with "Curtain It Up", a driving string ostinato that brings about the main theme of the movie, carried by the solo violin and fleshed out by the full orchestra, in a way inspired by violin concerti of the Classical period. The theme is reprised multiple times throughout the album's running time and is often left hanging with an unresolved cadence. The string section is beautifully layered, often accompanied by arpeggio runs on the harp and tonal support by the woodwinds, the brass being relegated to a quiet backing role. Pizzicato strings and bassoons often play around each other in comical fashion, never overbearing, to take us away from Julia's Theme from time to time.

The album is intercut with a number of short 1930s source songs, such as "Bei Mir Bist Du Schön" and "Smoke Gets In Your Eyes", offering an interesting counterpoint to Danna's flamboyant and elegant, classically-inclined string work.

After the 22-minute Shattered Glass album, here's another Danna soundtrack which features under 25 minutes of score music. Danna's genuinely emotional compositions deserve better and longer releases but, given the relative obscurity of some of the movies he scores, we can count ourselves lucky to get at least a glimpse into the musical simplicity and textural beauty of the notes he weaves. Being Julia concludes with "Quite Alone", a nearly-three-minute ode to Julia's Theme that reminds me why Mychael Danna, a fellow Canadian, remains at the top of my musical pantheon.