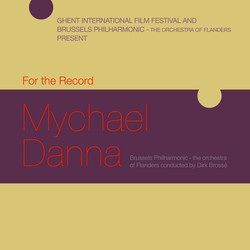 For The Record: Mychael Danna

The Ghent Film Festival continues its CD collection For the Record with a compilation of the best film music by Mychael Danna performed by the Brussels Philharmonic (Flemish Radio Orchestra) under the direction of Dirk Brossé.

This CD with film music by Mychael Danna is the second in a series that was given the name 'For the Record'. The intention is not just to offer a tangible souvenir of the concerts given in Ghent but also to contribute to the distribution of valuable and innovative film music. In this regard, Mychael Danna makes for a worthy successor to Craig Armstrong, who was the first to open the 'For the Record' series.

Last year, Danna was a guest at the World Soundtrack Awards with an unforgettable concert with music from Little Miss Sunshine, Monsoon Wedding, The Ice Storm and Being Julia. The album For the Record: Mychael Danna was recorded with the Brussels Philharmonic under the direction of Dirk Brossé in the Flagey Studios. On the album, there is music from Little Miss Sunshine, Being Julia, The Ice Storm and Capote, Shattered Glass, Where the Truth Lies and Vanity Fair. The Ice Storm was recorded live during the World Soundtrack Awards in 2007.