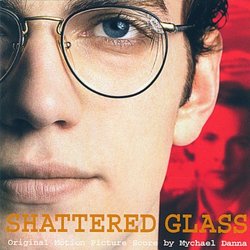 Some movies demand big, fanfare-driven scores. These, I think, might be the easiest to compose. When the composer has twelve French horns bellowing a heroic melody, it is a little hard to remain unaffected by it. Other movies, however, require a subtle score, sparse notes, atmospheric synths, just enough musical push to lift the material on screen to that next level without drawing attention to the fact that the viewer is deliberately being manipulated. That tear you cried just there? You can't blame the glockenspiel, because you don't notice it's in the background. But it's there.

The movie Shattered Glass is a fascinating and objective look at the real events that led to the unmasking of a gargantuan fraud at The New Republic, the "in-flight magazine of Air Force One". Young staffer Stephen Glass (Hayden Christensen) was popular among his colleagues. His pitches were always tough acts to follow given their outrageousness. His combined yearly salary was close to $150,000. The problem was that at least 27 of the 41 articles he got published in The New Republic were partially or completely fiction. The movie does not demonize any of the real characters but tries, as a journalist would, to present the facts and let its audience decide for itself.

Shattered Glass does not demand a big, fanfare-driven score. This is where Mychael Danna comes in. A born-and-bred Canadian (as is at least half of the crew that worked on the film), Danna is a little-known master of the art of breeding emotions in between bars on a piece of score sheet. While some create sadness with string crescendi of Harlequin romance proportions, he does it with a solo silver flute breathing a delicate melody. Some create beauty with layers upon layers of brass and woodwinds; he does it with a gentle gamelan orchestra. He is passionate about medieval music and what we Westerners would call "exotic" instruments, like the ney, the erhu, and the zurna. While a good portion of his scores have been firmly rooted in a non-Western culture (Indian for Monsoon Wedding and Armenian for Ararat, for instance), he has produced more urban material, such as Bounce, which is where Shattered Glass comes in.

The journalistic world portrayed in the movie is given the Bounce treatment, with fast percussion and beats and a strong recurring theme on strings. It is fully fleshed out in the main title cue entitled "TNR" and comes back during the movie whenever we are treated to an inside view of the publication trials and tribulations. The pace of the film slows down a few times, however, in scenes of powerlessness and despair, where it would be easy to layer in overly dramatic string work. Danna crafts a sullen, slow piano theme which comes back in goodbye scenes and aftermaths. It is delicate enough that you don't necessarily realize it's there in the movie, but its chordal progression is beautiful enough to push the emotions in the right direction. Finally, Stephen Glass himself gets a theme: dreamy, slightly unreal, and juvenile, it is mostly played by a high-pitched glockenspiel over a reassuring arpeggiac ostinato. The flute plays it in "Fact Check" and a slower version is articulated by the piano in "Stop Pitching".

The album is extremely short at under 25 minutes, but the meat of the score is there. The last three tracks are probably the best, with "Explain" beginning with a discreet reprise of Glass' Theme before segueing into the sullen piano theme. Then, during the double acclamation scene, the score finally soars without resorting to cheesy progressions or overdoing the feel-good aspect of the moment. "If You Remain Silent" offers the ultimate reprise of the piano theme, for once showing the powerlessness of Glass himself. And the "Epilogue", the second half of the end credits music, is the resolution of the introspective Glass Theme on strings, given a stately Baroque treatment to convey Glass' academic and professional dreams.

Movies like Shattered Glass demand a quiet, unobtrusive score that pushes the right buttons and doesn't overstate its welcome. Mychael Danna manages to do exactly that here, combining pop influences, delicate glockenspiel work, and his thematic mastery into a discreet but rich film score. Achieving this balance is a difficult task but Danna proves once again that feelings can be born out of music subtly, without the need for Harlequin strings or twelve French horns.