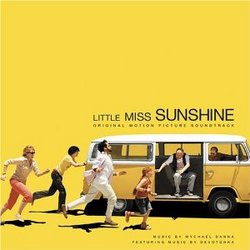 It is hardly a secret at this point that I am a huge fan of Mychael Danna\'s music. Last year\'s release of his score to Water ranks, in my opinion, as his strongest and most emotional work yet, a masterful score I didn\'t have the opportunity to review but which I hope many fans of film music will get their hands on. This new outing for the Canadian composer, the indie comedy hit Little Miss Sunshine, is a surprising one: it sees the composer disappearing behind modern folk band DeVotchKa. Gone are the breathy ney flutes, the bumbling tablas, the crystalline gamelans; what we get instead is an acoustic collage that has the word "indie" written all over it. Once the surprise has passed, Little Miss Sunshine becomes a quiet and enjoyable marriage of songs and song-inspired score pieces that never reaches the soulfulness of Danna\'s usual work but remains intriguing and appreciable.

There is still what amounts to the pale remains of a signature in the score cues performed by the DeVotchKa quartet. Regardless of the instruments Danna uses in his scores, one can still perceive this indescribable human emotion emanating from the music, this alluring mixture of grief, expectations, and nobility that has become Danna\'s trademark. It can still be heard in Little Miss Sunshine, even though most of the instrumental cues sound more like the best of MirrorMask than Water or The Sweet Hereafter. DeVotchKa use an acoustic guitar, a cello, a violin, a trumpet, a tuba, an accordion, and an acoustic drum set as their main colors and frequently integrate into the score melodic and rhythmic lines from their songs, which are themselves featured on the soundtrack. The album opens with "The Winner Is" which is essentially an instrumental version of their great closer, the song "How It Ends". Two songs by Sufjan Stevens salt-and-pepper the soundtrack, the happy and innocent number "No Man\'s Land" and the powerful and driving (if apparently overused) "Chicago". These selections work well among the DeVotchKa pieces, bringing in an additional layer to the music without disturbing the mold, but not so successful are "Catwalkin\'" and "Superfreak" which sound like a baseball crashing through stained glass. Their inclusion on the album is jarring and superficial; at best, they should have been relegated to the end as hidden bonus tracks after a few seconds of silence.

One of the most intriguing pieces is "We\'re Gonna Make It", which is perhaps the best representation of this marriage between Mychael Danna\'s sensibilities and DeVotchKa\'s sound. The title says it all: it is a musical race to the finish line, with a driving rhythm and an escalating instrumental force which one would expect to hear in a full orchestral fashion. It is given a fun, indie sound by the band performance: its wild romp is made more innocent and more human (also more comedic) by the solo instruments. If one can enjoy "We\'re Gonna Make It", the whole soundtrack to Little Miss Sunshine becomes an intriguing experiment in smaller folk sounds with a slight Eastern European twist, an American polka for dysfunctional families and the malaise of life. It may not convince Danna\'s usual fans expecting a grand, sentimental ethnic score, but it is a tribute to the composer\'s willingness to experiment and to DeVotchKa\'s talent.