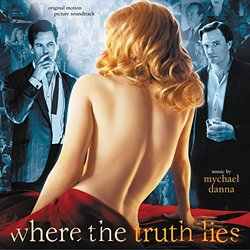 Where the Truth Lies

Review: Where the Truth Lies

Atom Egoyan\'s Where the Truth Lies has most critics unanimous: giant misfire. In this case, it unfortunately means that Mychael Danna\'s score is not so much a misfire as a giant disappointment.

After delighting us with powerfully emotional scores like The Sweet Hereafter and The Ice Storm, Mychael Danna seems to stumble and find the inspirational barrel empty on this one. The Asian flair is gone, replaced by jazzy overtones and cloudy string lines to accompany the storyline of a journalist determined to find out what happened when a young woman was found dead in a comedy duo\'s apartment. Said comedy duo is a Dean Martin/Jerry Lewis match of womanizing, alcohol-loving men played by Kevin Bacon and Colin Firth. Danna\'s score makes use of functional themes that pale in comparison to the material he put together for The Sweet Hereafter and Shattered Glass. His music is the very definition of underscore: quiet, unremarkable, strangely familiar, and bland. Minor key string progressions reveal secrets, piano players hit the low notes to create suspense, a muted trumpet communicates a bleak urban landscape, etc. etc. etc. "End of Story" kicks the volume up a notch with a descending theme on violins, climaxing I suppose but, in this context, the musical climax is the equivalent of a mildly interesting cue in a much better score.

The first Mychael Danna score I ever bought was The Sweet Hereafter and I bought it after having heard two or three cues from that soundtrack. I was hooked. His music just had this hypnotic quality to it and an overwhelming sense of tragedy, a score delicately balanced between the crystalline innocence of the silver flute and the ethereal charm of the ney flute. The next few soundtracks of his on which I got my hands confirmed that this was a composer who was not content to bring in an exotic soloist and force him to perform a Western melody; this was a musician who understood the history of the music he had to compose and who strived for authenticity. With Where the Truth Lies, the jazz noir feeling is right, but the music isn\'t leavening. It falls flat, sounds uninspired, puts one to sleep.

They can\'t all be winners.