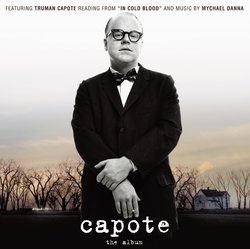 Capote is a prime and rare example of the validity of the following question, "What constitutes a soundtrack?"

Over the years, song-driven compilations have come to usurp the name "soundtrack", while the instrumental music is being more and more released under the term "original motion picture score". But what should one make of dialogue? Score fanatics roar in anger when CDs come out layering a few snippets of dialogue over the latest Horner; what about a CD that consists mostly of dialogue?

In what will probably stir Mychael Danna\'s fans\' exasperation (after the short Shattered Glass and the equally-as-short Being Julia), the original motion picture soundtrack to Capote mostly consists of Truman Capote himself reading from his book In Cold Blood. Only fifteen minutes and twelve seconds of Mychael Danna\'s score can be heard, spaced in between Capote\'s verbose prose. What\'s dilemmatic is that the album works that way, yet one is left to wonder why the producer of the release made this unusual choice and why more of Danna\'s score wasn\'t released instead.

The excerpts from In Cold Blood, which tells the nonfiction tale of two would-be robbers murdering a family in Holcomb, Kansas, using literary devices and a storytelling narrative, are absorbing and the short, quiet pieces by Danna serve to accentuate the imagery that Capote\'s precise, engaging words give birth to. They made me want to read the whole novel, but should that be the point of a soundtrack release? Danna\'s minimalist score functions on album as it does in the movie: it accentuates, never highlights, it creates a mood and ties scenes together. It\'s background wallpaper. Good wallpaper, sturdy, very well crafted, but wallpaper nonetheless. Where a soundtrack album should have promoted the music to the forefront, it keeps it hidden in a puzzling marketing move.

The sullen piano theme from Shattered Glass is somewhat recalled here and Danna shows his audience that it\'s not how many notes you use that matters, it\'s which ones you pick. He is careful to build condensed, fragile melodies where each note is delicately hammered and the impact of each of these notes can be felt. A small string ensemble is used and solo violins, violas, and celli sift through the proceedings, carrying echoes of themes, melodic fragments, as if musicians are walking in and out of the recording studio. A quiet dissonance is established over which a piano nocturne turns into a succinct theme, such as in "Epigraph" and "Answered Prayers".

I generally use the 2.5 stars rating for a score that left me cold, that is neither bad nor particularly good. I am using it here because I do not know if I can recommend this "package" or, if I can, to whom I should. It is not a soundtrack in the traditional sense, but more like a Reader\'s Digest version of an audiobook with a bit of music to enhance the mood. Danna\'s score is very good, and the narration by Capote himself commands one\'s attention, but this is one release that left me scratching my head.