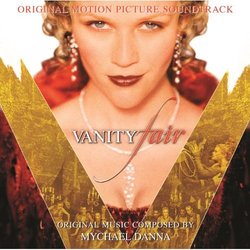 Michael Danna is one of the most chameleonic composers currently in the film business, mostly due to the fact that he carefully selects independent films or films with atypical subject matter on which to work. Working in this facet and with such provocative directors as Atom Egoyan has allowed Danna the opportunity to experiment with various exotic, instrumental techniques, not unlike the arenas Thomas Newman has entertained. His one brush with a blockbuster film was 2003's The Hulk, directed by prior collaborator Ang Lee, which ultimately ended with his radical Middle Eastern approach being tossed and rapidly replaced by a score from Danny Elfman. Now Danna is back on the indie film front, providing music for the literate, social climbing costume drama Vanity Fair.

The album proper begins with the lovely, haunting "She Walks in Beauty", highlighted by vocals from Sissel (of Titanic fame), a melody which then bleeds into "Exchange", with vibrant orchestral accompaniment. This second track immediately sets the rich classically styled tone of the score, one drenched in inspiration from the Mozart school of composing. This is further reinforced in "Becky and Amelia Leave School", a lovely, ebullient cue wonderfully reminiscent of Mozart's famous clarinet concertos. We have heard many soundscapes from the mind and talent of Michael Danna, such as electronica (Exotica), gamelan percussion (The Ice Storm), folk (The Sweet Hereafter), Arabic (Ararat), and now shows quite an impressive of the orchestral arrangement prominent in the late 1700's. It is true that film scores in this idiom have been written before, for instance Rachel Portman, Michael Nyman, Patrick Doyle and Richard Rodney Bennett have all tossed their baton into this ring to great success and now Danna has achieved a similarly sonorous peak.

The score continues with a plaintive piano solos in "Andante" and "Adagio" while "No Light After Eleven" becomes anchored by a pleasant waltz rhythm. Hushed tones begin "Becky and Rawdon Kiss" which then develop into sublime strings and woodwinds, a track then countered by the contrapuntal element of "Sir Pitt's Marriage Proposal". The piano appropriately returns in the melancholy "Piano for Amelia" but this tone is soon overpowered by brass clarion-type calls and dramatic orchestral churnings with the "Announcement of Battle". However, this track then drifts back to the more sublime textures of earlier. A fervent dose of urgency covers "Time To Quit Brussels", which then evolves into the mournful dirge heard in "Waterloo Battlefield". More somber tones color the last third of the album, in "The Virtue Betrayed", "Rawdon's End" and "Dobbin Leaves Amelia", but these provide both a satisfying emotional underpinning to the score overall and further variations on melodic material from "She Walks In Beauty".

An aspect of the film focuses on the British occupation of India and this is reflected in such tracks as "El Salaam", performed by Hakim, and "Gori Re", performed by Shankar Mahadevan and Richa Sharma. These tracks contrast radically to the formal, Western classical techniques displayed throughout the rest of the score, but are enjoyable in their way if you are one who enjoys Indian musical styles. The score does not end with a rousing orchestral flourish as might be expected, but instead with the aforementioned upbeat vocal number "Gori Re". Overall, the diversity and marvelous invention in Vanity Fair is another fine feather in the film score cap of 2004 and in my opinion is easily a frontrunner for Oscar consideration.