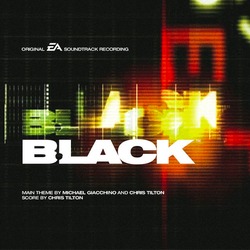 For their latest video game, BLACK, composers Michael Giacchino and Chris Tilton share credit on the main theme, rather than the whole score. Giacchino\'s previous game scores (Medal of Honor, Call of Duty) have an influence on the sound of BLACK, but the score is entirely Tilton\'s. BLACK is a bit more restrained than the militaristic Mercenaries, but Tilton still utilizes the powerful theme, as well as an interesting range of game-play cues.

The main theme is actually slow for a tactical action-based game, but the constant presence of some sort of tense, moving string line keeps the score from ever getting slow. The theme is instantly recognizable and begs for repeated play; fortunately, Tilton uses it profusely and in countless forms. Normally performed in the brass, which soar above the other orchestral elements, the theme is both tense and uplifting at the same time.

The game-play cues featured on the album become more tense and fast-paced than the "Main Theme", but again, the theme is always just around the corner. "Madhouse Mayhem" features one of the more complex statements of the theme at the end of the cue. The most unique cue on the album is "Black and Boom" and features a taiko drum ensemble, like Tilton and Giacchino did for Mercenaries. Additionally, the major theme statement in this cue moves between the trombones and French horns in an unexpected mid-theme hand-off. Much of the action has a bit of a John Williams edge to it, with a dash of "Alias" tossed in for good measure.

A secondary action theme, which is reminiscent of Marco Beltrami\'s action theme from Hellboy, is featured in "Gulag Gauntlet", but is heard in various arrangements through many of the tracks. The most impressive cue in terms of composition is "Ambush", which is the most restrained track, but features some beautiful brass chords and suspensions with the strings.

The album ends well with a reprise of the main title that opens with a solo horn playing the theme, followed by a low string ensemble, which segues into the full orchestra. BLACK showcases Tilton\'s ability to manipulate themes and the strong orchestral performance only adds to the listening experience. Released only as a digital download, you won\'t find BLACK in stores, but you can get it on iTunes or direct from Nettwerk Records.