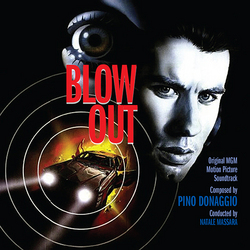 Track Listing Legend:
* Not in Film

Just a year after composer Pino Donaggio paired with Brian DePalma on the Hitchcock-inspired Dressed to Kill (soundtrack also available on Intrada), the team tackled another genre-mashup thriller—Blow Out. Donaggio's music is a meld of his infectious synthesizer-led rhythmic voice from lower-budget horror scores of the era (to accompany the film's false opening), to richly melodic, dynamically vivid orchestral score worthy of the best A-list pictures.

The score is anchored around an exquisitely sad and regretful love theme, introduced on piano and strings when we first meet the character of Sally. To characterize his male protagonist and antagonist, Donaggio took an opposing approach. In a number of cues he applies a funk-guitar vibe to Jack, establishing him as proactive and upbeat.

After Pino Donaggio recorded his 55-minute score for Blow Out on 2″ 24-track tape at A & R Recording Studios in New York City, he mixed and edited approximately 48 minutes of it down to 1/4" 15 ips two-track stereo for inclusion on a possible soundtrack album. The album never materialized and those two rolls of stereo tape are all that has survived of the score. They are the source of this current CD, made available courtesy of MGM and housed in perfect condition in their vaults.