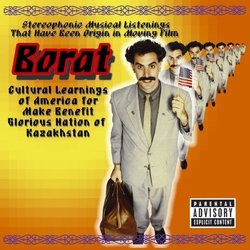 Borat - Stereophonic Musical Listenings That Have Been Origin in Moving Film

Review: Borat - Stereophonic Musical Listenings That Have Been Origin in Moving Film

Sascha Baron Cohen.  What hasn\'t been said or done by this Brit wit already, through his various character incantations, is very short indeed. As "Ali G", he\'s interviewed heads of state, notable intelligentsia, and various other famous folk. An off-shoot of the popular BBC (and HBO) show, one of Cohen\'s other characters, "Borat", makes his own debut, in his own "special" way in Borat: Cultural Learning of America for Make Benefit Glorious Nation of Kazakhstan.

The album itself, entitled, Borat: Stereophonic Musical Listenings That Have Been Origin in Moving Film, has it\'s own quirkiness that pairs well with the film. I\'m not sure your average viewer of this film, let alone somebody who\'d casually pick up this CD, would easily say, "I am really in the mood for Kazakh music". Well, honestly, that\'s actually some of what you get (namely gypsy music). The best track, however, is the second one in, which appears over the end credits, a cover of Steppenwolf\'s "Born to Be Wild" done by a Romanian brass band, Fanfare Ciocărlia. It\'s by far the musical takeaway moment of the film, barring all the visual take-aways, of which there are a plenty.

It\'s far from saying you couldn\'t have pieced together a more appropriate soundtrack to a film of this ilk and timbre. If I was the music supervisor, I wouldn\'t have known necessarily where to start, but somebody, in this case did, and did it well. It\'s musically organized chaos and craziness, which some of the gypsy music, a mix of Middle-Eastern rhythms and Eastern and Central European brass bands, sounds like. I\'m sure they would have gotten actual Kazakh musicians, rather than Bulgarians and Yugoslavians, if Kazakhstan didn\'t have a ban on Borat/Cohen from visiting their country (if there isn\'t one now, there will be one after the release of the film)

The original score was written by Sacha Baron Cohen\'s brother, Erran Baron Cohen, a well known DJ, songwriter and producer (notably Middle-Eastern artists). Given some of the titles he\'s credited for on the CD, the music was only the kind a brother could write! Other interesting tidbits and, said lightly, standout tracks, are those from O.M.F.O. (Our Man From Odessa). Although a too interesting of a story to highlight in this review, O.M.F.O. definitely expands on traditional European folk music with a modern, albeit 80\'s electronic twist. Once again, encapsulating just the right musical "tics" for the film.

The dialogue snippets aren\'t as annoying as some other film soundtracks, because they work apart from the film well. There\'s even a few items on the album from the television show, such as the rather controversial "In My Country There Is Problem (Throw the Jew Down the Well)". As with the title of the soundtrack, the whole disc stays "in character" throughout it\'s svelte forty minute playing length. If you enjoyed the film, and are desperate for a Borat audio fix, pick up the CD. (HINT: The Borat theme from the TV shows is on the disc, I\'m just not tellin\' which one it is!)