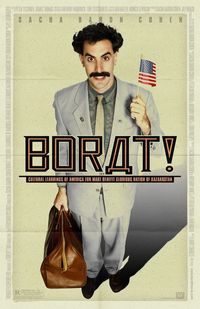 I\'m not sure if I\'m the only one who viewed this film, laughed, and then wondered if I shouldn\'t have. Over a year after it\'s release, I had a chance to view it again, this time in DVD form, and found myself able to laugh at it in the comfort of my own home, without the possible politically correct stares from the audience members. Borat, as a character itself, is not very multi-dimensional, but rather a just above \"sly\" poke at our own prejudices towards foreigners, other religions, race and politics. The poke, however, is not towards Kazakhstan, but rather at the United States of America. From New York to Virginia, from Georgia to California, not a single group escaped Sascha Baron Cohen\'s mirror.

Most of the people who probably watched the film, as those who watch Paul Verhoven films, just may have only appreciated the very overt items, such as the naked wrestling, the bad jokes, and other simple gags. But, when combined with what I had mentioned earlier, the film is a pitch-perfect satire, that only the British can seem to pull off. I\'ve become enamored with the soundtrack as well, because, well, it just fits, and reading my review of it probably doesn\'t add much. However, tracking the film with gypsy music (pop or traditional) brought out even some of the other-worldly characteristics of how this big \"joke on Americans\" played out on screen.

The film definitely received the awards and nominations it deserved, and much like a classic Marx Brothers film, I\'m sure in time, it\'s going to be viewed as a time-capsule film of wit and pop satire. While this may not be something akin to an old Ealing Studios comedy, at least the belly laughs were worth it.