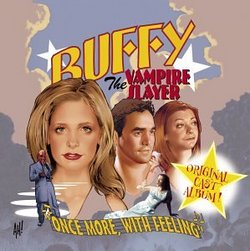 Buffy the Vampire Slayer: Once More, With Feeling

Review: Buffy the Vampire Slayer: Once More, With Feeling

This is one CD I have no trouble labeling, "For fans only". If you were not an ardent follower of Buffy the Vampire Slayer, if you didn\'t see episode 607, if you\'ve got no idea why there was mustard on someone\'s shirt in the first place, then all you\'ll be hearing here are strained voices, wavering high notes, and broken harmonies. It\'s a bit like not being in on the joke. This joke lasts 38 minutes and those will be 38 painful minutes if you don\'t know what\'s going on.

The creator of the show, Joss Whedon, had always wanted to do a musical episode, back when it wasn\'t trite and clichéd to do so on every TV show that went past its second season. And, eventually, he found just the right story. Buffy Summers is a vampire slayer, one girl in all the world, chosen to fight the forces of darkness and imbued with supernatural strength and agility. Following her death at the end of season five, her friends bring her back through dark magic, unknowingly pulling her from heaven and dropping her into a corrupt world filled with demons and night crawlers. Then a pendant is stolen from the Magic Shop, a dancin\'-and-singin\' demon is called forth, and soon all of Sunnydale, California, is acting like they\'re in their own private musical. The lyrics and music were both written by the über-talented Whedon, with additional score music by Christophe Beck.

The cast can sing; the problem is, they can\'t sing. Well, for the most part. Sarah Michelle Gellar\'s voice lacks power and versatility and the least said about Nicholas Brendon\'s slightly-lispy, tone-deaf musical wanderings, the better. However, there are pleasant surprises. James Marsters\' can muster a deep, gravely voice that lacks just a tad in raw power and Anthony Stewart Head, who does have a sideline of sorts as a professional musician, is gifted with an at times whispery, at times soulful and vigorous voice. Special guest star Hinton Battle as the singing demon is easily the highlight here, his "What You Feel" showcasing his broad range and suave melodies.

On an album like this one, however, the performances should be the least of anyone\'s worries. It\'s the exuberance and the fun that matter and this original cast album has those in spades. Virtually every genre, a staple of musicals or not, is visited in "Once More, With Feeling", from the sultry jazz number "What You Feel" to the rock anthem "Rest in Peace", from the faux orchestral "The Mustard" to the West Side Story-inspired "Walk Through the Fire". Some of the songs\' melodies are reprised as orchestral intros or outros to various cues, making for a somewhat consistent listen. The musical concludes with "Coda", Buffy and Spike\'s duet which merges the melodic lines of both "Walk Through the Fire" and "Rest in Peace" into a reprise of "Where Do We Go From Here?" which itself is adapted as a fun big band number for the end credits.

Fans of the show will be pleased by the album\'s addendum, which features three suites from Christophe Beck\'s orchestral scores to the series. His suite from "Restless", the season four finale, contains some dreamy soundscapes and aggressive drum work for Buffy\'s desert fight with the First Slayer. His cues from "Hush" might be his most Elfmanesque, with a great minor key vocal theme for the creepy Gentlemen who come into a town, steal everyone\'s voices, and collect their hearts. The cue "First Kiss" introduces the Buffy/Riley Love Theme and the action-packed "Schism" is a favorite piece of mine, adapting the Gentlemen\'s Theme into a dramatic brass powerhouse, rushed to the finish line by an army of bass drums. The final score cue on the album, "Sacrifice" from "The Gift", is a melancholic piano elegy to accompany Buffy\'s ultimate sacrifice in the season five finale.

"Once More, With Feeling" concludes with an encore: Joss Whedon and his wife\'s demo of "Something to Sing About", the climactic song in the musical. It\'s cheesy and slightly amateurish but, once again, this is firmly for fans only. Love it or hate it, the cast of Buffy the Vampire Slayer got to show off their singing chops in "Once More, With Feeling". Most of the time, though, their vocal talents will probably be buried a couple of notes deep by your own singing voice (shaky or otherwise) because, oh yeah, the liner notes include lyrics.