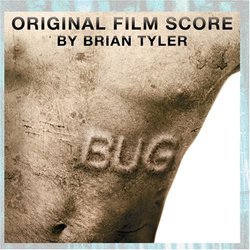 There are multiple ways to approach scoring a horror film. Brian Tyler has experimented with a number of them including dark and beautiful (Frailty); dark, bombastic action (Darkness Falls); epic yet creepy as in Constantine; and then, of course, there is dark and deranged, which is what characterizes his latest project, Bug. The last film Tyler scored for director William Friedkin was The Hunted, a percussive score which featured a strange array of strange time signatures, including 19/8. For Bug, Tyler tried to keep the score uncomfortable and foreign, hoping that if he felt uncomfortable writing it, the audience would feel the same during the film. This is a very difficult score to rate, given that Tyler has written it intentionally for listeners to not like. However, we\'re talking about the needs of a horror film and Tyler\'s score for Bug is a step beyond most composers\' contributions to the genre.

Tyler\'s avante garde approach to Bug is a similar idea to what Lalo Schifrin applied to The Hellstrom Chronicle, giving it an atonal and unmelodic sound. Like with The Hellstrom Chronicle, Bug features insects as a central component and certain droning, buzzing sounds are effective for them. The album opens with a three-part suite, "Birth", "Life", and "Death". Beginning with creepy electronic effects and solo cello, this suite moves into a pulsing cue that remains just above ambient with short electronic blasts and solo electric violins. "Death" adds some heavy drums and distorted marimba-like sounds. Towards the end, the volume fluctuates and then sizzles to a quiet end.

The album continues with score cues, opening with the main theme on solo piano in "Nocturne for Lloyd". This theme is not used often, but does return, again on solo piano, in "The Temptation of Dr. Sweet" mostly over ambient sounds in the back. The theme is briefly hinted at "The Motel in Oklahoma" and then ends the album quietly in "Peterception". A secondary thematic element is the electronic pulses heard in "Life", which return in "Aphids", here accompanied by additional noises. A very melodic electric guitar moment gives way to a full rock cue in "Millions" and the marimba sounds return in "Conception". Rather than thematic, Bug utilizes a number of rhythms and noises that return periodically throughout the score. Even the so-called piano main theme is more a sound color than a melodic pattern.

Some cues sound more like sound effects than score, such as "Mantra", which includes a droning air conditioner unit as well as random beeps and other such noises. While "Drug" takes on a somewhat rock-influenced noise, "Phonescape" picks up an interesting beat in electronic percussion beneath a whining electric string instrument, but gives this cue a bit of motion that other, droning parts of the score lack. "The Solution of Fire" has an echoing tone that for some reason sounds like the dull roar of a fire burning, with an almost vocal, ethereal tone to it. This album is a very difficult one to listen to, but it is quite interesting in a disturbing sort of way. I doubt I will find myself listening to it often, but in terms of a score than enhances a film, it probably functions better than most, given that it is creepy and unsettling when not even accompanied by the film. It is a hard album to rate, but as a score, it pushes the boundaries of horror film music to a level that I really don\'t know if I want to see the next step to.