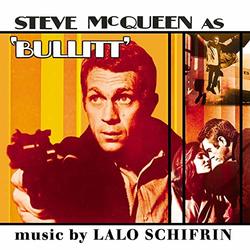 Performed by
The WDR Big Band

by David A. Koran July 9, 2000
4 / 5 Stars
To say one has reached a state of pure nirvana would be an understatement to my joy of seeing, and then listening to this gem that appeared on my doorstep, Lalo Schifrin’s masterpiece, Bullitt. I first became a true Steve McQueen fan because of both Bullitt and The Great Escape, and became fans of the composers for both of those films, Lalo Schifrin and Elmer Bernstein respectively. Although there were albums for each film released, each suffered from the fact that they were not complete. Rykodisc remedied that for The Great Escape two years ago, and today Lalo Schfrin’s record label, Aleph, has remedied that for Bullitt as well.

I own the original album of the score on an import Japanese CD as well as the DVD (the very first DVD I ever purchased) of the film. I was disheartened originally that the album did not have the same arrangements of certain themes as heard in the film, but became satisfied at the time that I did have at least some of the music. To put lightly how much the film affects the music and vice a versa, after viewing the film, you can never drive around San Francisco the same again. On a recent vacation there, I was doing my tour of the city and came across a number of streets I know were in the film, and just started humming the "Main Title" while driving…it just fit it, even after 32 years. Even if the music sounds somewhat dated to the casual listener, when matched up to the film, and with some background knowledge of the time and place, the music Lalo provides is a true soundtrack to not only the film, but to the city, the people, and the prevailing attitudes of the time. For the uninitiated, the well-written liner notes on this re-recording will fill most of you in, for the others, just cue up the CD and enjoy.

From the start of the first track, you can hear that this isn’t your typical re-recording you may find from Silva or Varese Sarabande, but this is an attempt to reproduce the soundtrack just as it was originally recorded. Like the original, the sessions used on this album were closely miked and mixed exactly, not close, but exactly as they appeared in the original soundtrack with a tiny bit of sweeteners. I was totally blown away by this and am very happy that Lalo and his recording engineers spent the time and effort to due this, and it is truly a testament to how much they care about the music. It helps that the original composer also conducted and arranged the music for this recording, providing us with previously unreleased cues and some from the original album as well, including a new guitar only arrangement of the theme. I really can’t praise this release enough, the musician who wrote it, and just how damned cool the film is. Like sci-fi films can never be without John Williams and westerns without Elmer Bernstein, the police-story genre can never be without Lalo Schifrin, each have perfection in those story elements.

The music itself is a mix of upbeat American jazz with a smattering of lounge-like music to substitute for what would be orchestra fill nowadays. The theme is outstanding, even though it only appears in a few small sections of the film, it stays with the listener long after the film ends. One of the most memorable and famous scenes in the film, the car chase, remarkably is not scored, only set up, which by today standards is considered extremely risky. Could you imagine something like Armageddon or Mission Impossible 2’s action scenes devoid of music… I think not. The music also helps define the attitude of Frank Bullitt (Steve McQueen) to his life, his surroundings, and his feelings, helping the viewer get an emotional connection to main character. Basically, the score to Bullitt is exactly what a perfect film score should do, end of story.

I applaud Schifrin and his label to doing the score justice on this album and would hope that their hard work continues and that more labels will step up to the same plate and put out the same effort and quality work on their CDs. For fans of the movie, run, drive, fly, or whatever you have to do to find a location that sells this CD and buy it, it’s not just essential, but it’s really required now if you call yourself a fan. For the first time listener, or somebody that wants to hear a composer at their best (for a composer that’s written so much great stuff), I also highly recommend grabbing this release. One can only imagine what will be released now that can top the work presented here, anyone ready to step up to the plate?