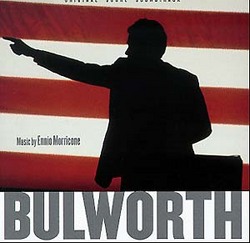 by Dan Goldwasser October 15, 1998
3 / 5 Stars
I have to admit it - I hated the film BULWORTH. I was shocked when the critics were giving it rave reviews, and calling it the best film of the year. But I also have to admit that I saw the film back in mid-February at a test screening, and while I thought it was the worst film I ever saw, they may have fixed it - but I never saw it again.

In any case, I was surprised to find out that there was over 40 minutes of score by Ennio Morricone on the CD. I doubt that there was that much music in the film, so it was a real treat to listen to when I popped the CD into my player. The CD is also only 2 tracks long - providing us with a 17:49 minute long track, and a 23:41 minute long track. I also then noticed on the back cover that it said "Recording produced by Ennio Morricone in May 1988 at Studio Music Village, Rome". May 1988? What's the deal with that? Thinking it was a typo, I looked inside the liner notes. Nope - May 1988 again. This actually makes sense though - Spike Lee used music by Aaron Copeland in HE GOT GAME - why would Warren Beatty be any different?

So, keeping the fact it was probably recorded in 1988 in the back of my head, I began to listen to the score. I was blown away. This score was in the style of THE UNTOUCHABLES - a dramatic and sad theme performed by almost exclusively strings. At some points, a solo voice would provide a gospel touch to the music. The soloists were Amii Stewart and Edda Dell'Orso - people Morricone has apparently worked with before.

The second track is full of suspense cues and bits of action with again is very similar to THE UNTOUCHABLES. Even some parts are similar to THE MISSION. We have pizzicato and strings with high woodwinds adding to the atmosphere while percussion provides the rhythm.

All in all, this score was a pleasant surprise, and is definitely worth getting, even if you didn't see the film.