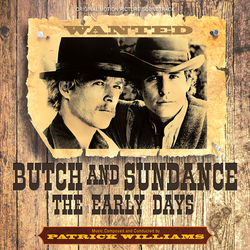 Butch and Sundance: The Early Days

One of the things that makes Butch and Sundance: The Early Days work so well is the great score by Patrick Williams. Williams wrote an eclectic score—playful, beautiful, filled with adventure and bravado, tenderness, and gorgeous melodic themes. It works perfectly in the film, complementing the visuals, the comedy, and the drama, a real old-fashioned honest-to-goodness film score by a master composer.

Almost the entire score was recorded twice. Some cues remained exactly the same in both orchestration and writing, while other cues had slight differences in orchestration and timing, while other cues had quite a bit of different material. We present the entire score as used in the film (along with an unused cue), and then, as a bonus we present the original versions of cues where they differed from the rerecorded cues.

Butch and Sundance: The Early Days is limited to 1000 copies only.