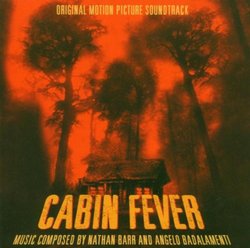 Cabin Fever is a rousing throwback to the hey-day of modern horror: the late 70s - early 80s.  Filmmaker Eli Roth pays homage to the movies he grew up and loved by creating a horror film that doesn't play by the current rules: it's full of gore, politically incorrect humor, sex, isn't afraid to take chances, and has a mean streak a mile wide.  It tells the simple story of 5 recent college grads who take a trip out to the woods.  After encountering a derelict with a strange condition, they find themselves succumbing to a flesh-eating virus.  Paranoia and terror ensue as the friends turn on one another in their primal desire to survive.

Giving voice to the proceedings is composer/performer Nathan Barr.  Roth knows that any good horror movie lives and dies by its score.  Here he's made the right decision by choosing to go with a relatively unknown composer yet someone who shares his tastes and influences.  While the film's detractors have noted the seemingly out of place humor popping up in the film, they fail to mention the tone created by Barr's score.  Yes, strange peripheral characters seem to come of nowhere, and the situations in which the characters find themselves can be quite hilarious at times.  Given another type of score, the film could have easily veered into parody, and criticisms about uneven tone would have been valid.  However, Barr's foreboding score lets you know exactly where the film is headed.  The humor is there but is tempered with Barr's dark nihilism.  Deep down, you know it's not going to end well for anybody.

Due to Roth's long-standing relationship with David Lynch and composer Angelo Badalamenti, Angelo has contributed a few pieces to the score.  One is a Lynch-ian groove for "Deputy Winston", who himself would find a comfortable home in a Lynch movie.  The other notable piece is what passes for a love theme in the world of Cabin Fever titled "Red Love".  Although light in tone, they still manage to find a place in this score which belongs primarily to Barr.

The real meat of the score begins on track 7 with "Main Title/Infectious Dog".  Barr sets the tone for what follows right out of the gate.  Cellos, strange wind instruments, and percussion are used to create a dissonant unsettling atmosphere.  At times it recalls the work of Krzysztof Penderecki whose music was used to great effect in The Exorcist and The Shining.  Barr's score echoes that composer's use of atonal strings and dark soundscapes but gives it a more cohesive feeling.  Themes and motifs are ever present as are the action cues with cellos providing the main thrust.

Aside from Badalamenti's pieces the only other cue with a different tone is "Jeff Makes It".  Here the cue begins with a despairing downbeat motif as Jeff surveys the bloody aftermath inside the cabin.  As Jeff realizes he is, in all likelihood, the only survivor, the strings quicken in pace and strike a rather hopeful and victorious note.  Before long, the cue segues into the familiar 'virus sting' as Jeff's predicament is revealed.

Barr has created an excellent score to Roth's deranged little funhouse.  Its tone is essential to the film and gives the flesh-eating virus its own voice.  Although dark and downbeat music may not be to everyone's tastes, it's essential listening to horror movie fans.  One can only hope that this film is the beginning of a long collaboration between these two creative minds.