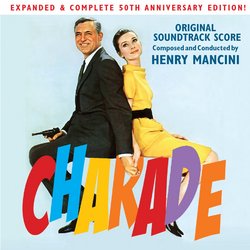 Director Stanley Donen put Henry Mancini in the penthouse suite of London's swanky May Fair Hotel for almost three months when he was given full reign to write what is considered by many to be a close-run second to his score for Breakfast at Tiffany's. This music was also recorded in London.

Set in Paris, this rom-com-drama is full of sinister characters played in true "who-to-trust" style.The twist this time was to have a leading lady (Audrey Hepburn) being the chased (and chaste) person! Cast against Cary Grant and a superb co-starring role by Walter Matthau , Mancini's exotic-rythms seem to fit just right to each frame!

This important and very special 50th anniversary edition runs to almost 78 minutes with music that was actually heard in the film, not that which was re-recorded for the much truncated vinyl album.