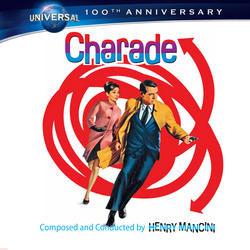 With this premiere release of the original film recording of Henry Mancini's score to the 1963 film Charade, Intrada helps Universal Pictures celebrate their centennial with one of Mancini's most famous film scores. Scored in the same period as Hatari!, Breakfast at Tiffany's and The Pink Panther, Mancini was able to turn out another hit tune —both instrumental and song versions (with lyrics by Johnny Mercer) of his main theme that made the Billboard charts. And the film offered ample opportunity for pop and novelty source music, most of which found their way onto Mancini's original re-recorded Charade album.

That left Mancini's dramatic underscore MIA—and as this new album shows, the composer's genuine film music is every bit as distinctive and entertaining as his pop tunes. Playing against Maurice Binder's whirligig animation patterns, Mancini's main title tune for cimbalom over Latin percussion rhythms establishes a mood of mystery and intrigue before strings sweeten it into pure romance. Mancini's melody plays as a wistful, lonely love theme at several points in the film, providing a common thread throughout the score.

For this album, Intrada had access to the complete mono elements stored in Universal's vaults. The elements were in perfect condition providing a crisp and detailed sound.