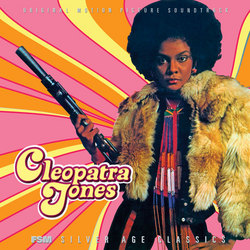 The soundtrack to Cleopatra Jones (released on Warner Bros. Records) was a collaborative effort of two R&B artists from the Spring Records label, Joe Simon and Millie Jackson, and score composer J.J. Johnson (himself collaborating with Carl Brandt). Simon's "Theme From Cleopatra Jones" kicked off the LP and film with a groovy ode to Cleo's prowess, while two of Jackson's performances, "Love Doctor" and "It Hurts So Good," were taken from her concurrent record album for Spring. Combined with two additional (and previously unreleased) source cues by Roger Kellaway (sung by Pattie Brooks), the Cleopatra Jones soundtrack is a minor-masterpiece of the "symphonic funk" fusion that identified the genre.

Unlike most of the "blaxploitation" films, Cleopatra Jones and the Casino of Gold did not involve an African-American recording artist—although you wouldn't know that by listening. Veteran composer Dominic Frontiere provided a pulsating, funky score with exotic instrumentation for the Far East setting (and martial arts action) in the best tradition of Lalo Schifrin's seminal Enter the Dragon, as well as a groovy title song, "Playing With Fire."

This 2CD set is a feast of Cleopatra Jones tracks: Disc one features the Warner Bros. Records album program to Cleopatra Jones followed by a new program of solely the dramatic score by J.J. Johnson and Carl Brandt (including several previously unreleased cues). Disc two features the complete Cleopatra Jones and the Casino of Gold score by Dominic Frontiere, as well as bonus tracks of instrumental and alternate-lyrics versions of the main title. Disc two closes with additional selections from the first film: extended versions of the Joe Simon title song, as well as the aforementioned Roger Kellaway source cues.

The entire 2CD set is in excellent stereo sound, with liner notes by Scott Bettencourt.